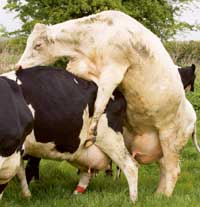 But a new technology which extends the lifespan of sperm makes the timing of AI less important.

SpermVital is an extender that puts the sperm in to a state of “suspended animation”, according to Geno-UK’s Wes Bluhm. “SpermVital means sperm are encapsulated in a gel which dissolves gradually, allowing the sperm to become active and capacitate over an extended period, living for about 48 hours in the cow instead of the usual 24 hours.

“This not only makes timing of insemination less critical, but also eliminates the need for double insemination and allows insemination in pro-oestrus instead of waiting for 12 hours following first signs of heat.”