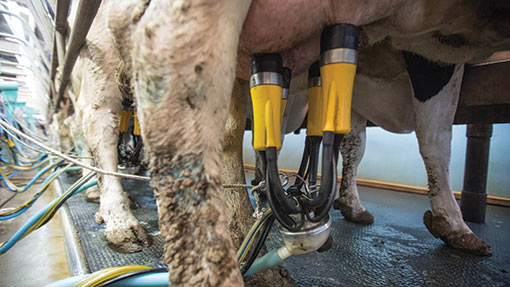 Taking a more proactive approach to cow health and identifying problems earlier is enabling a group of dairy farmers to improve herd performance.

Earlier this year, AHDB chairman Peter Kendall highlighted that ramping up dairy herd performance could add £450m to the value of farm output.

The benchmarking carried out by Pan Livestock Services compares farms in the DEW group against 500 farms.

“The 500 were selected from all NMR-recorded herds to give a national picture representative of the whole spectrum of herd performances,” explains director James Hanks.

“Data from the study is used directly by NMR’s InterHerd+ to produce reports for producers, their vets and advisers to benchmark individual herd performance for 32 parameters against that of the 500 study herds.”

These monthly reports have been specifically developed for DEW members to show them, at a glance, what is working and what is not. It also shows trends to determine whether the measures are improving or worsening.

“Those performance measures in the red zone are flagged and farmers can then dig deeper in the data to investigate. The reports also highlight potential problem cows for discussion with the vet and nutritionist.”

And this is the approach being taken by the Dairy Early Warning (DEW) group of farmers, who have collectively gained £90,000 through improved somatic cell counts alone.

The group was established by Drove Veterinary Hospital, Swindon, two years ago. Partner Peter May had two key aims: the first was to initiate a greater involvement of vets in herd management. The second was to get farmers to benchmark themselves against others in the group and the 500 NMR-recorded herds.

“This has been really successful,” says Mr May. “Farmers like to see how they are getting on compared with their neighbours and in the national playing field.

“And the DEW group has meant the door is open for vets to be more involved with ongoing performance,” he says.

“It is no good just being rectal tourists, sticking arms up cows’ behinds to pregnancy diagnose them. Vets need to be more proactive in helping farmers improve herd performance, such as fertility and somatic cell counts,” he says.

“By the time you find cows are empty, it is too late,” he adds.

Farmers could have  intervened earlier with vet support. Indicators such as milk protein can highlight any shortage of energy, rather than waiting to see PD rates declining.

The second aim is to get farmers benchmarking their herds against a national cross-section of 500 NMR-recorded farms (see panel above).

James Hanks, director of Pan Livestock Services, who carries out the annual analysis of the NMR herds’ data, says there is massive value in comparing figures and seeing which national quartile a herd lies in (bottom 25%, average and top 25%) for key indicators.

“The aim is for those in the bottom quartile to move to the next one up and those below average to move above average, and so on.”

Progress has been impressive, as Dr Hanks points out. The group started with 58% of herds falling in the bottom half nationally for somatic cell count.

Two years later only 36% are still in the bottom half. “There has been a mass exodus from the third quarter to above average.

A key feature is the dairy early warning report, which each member in the club receives monthly, which plots performance of their herd for a wide range of parameters and indicates whether each is improving or not.

The report forms the basis for discussion as to possible causes and any need for investigation, says Mr May.

Club members get together for one meeting each quarter on a particular topic. The most recent one, for example, was on somatic cell counts. This is followed up by a farm visit, hosted by one of the members, to showcase examples of good practice.

There is a nominal fee of £10 to cover admin and Mr May hopes this approach will be taken up by other vets over time.

The improvement in somatic cell count at Mayfield Dairy since joining the group equates to an extra 0.3p/litre premium on milk.

The 400-cow Holstein herd supplies milk to Sainsbury’s and “there are many hoops to jump through”, with stiff milk quality targets, explains farm manager Geoff Hopkins.

But a high staff turnover and inexperienced staff meant the same practices and milking routines were not always being followed, which was having an adverse effect on somatic cell counts.

“Cell counts were teetering on borderline,” he recalls. So he worked with Drove Vets’ Mel McPherson and Peter May. She ran monthly tutorials with new staff to help bring standards up to scratch.

“We got the team to understand the milking routine and why it is important. The key was to ensure all staff were following the protocol.”

A milking routine was developed that consists of using pre-foam, then dry wiping, stripping cows and a post-milking spray.

Mr Hopkins also voluntarily opts for milk testing at every pick up. “At £2, this is really worthwhile. Otherwise you have 30-31 days of milk based on five pickup samples.”

He adds that it also helps incentivise the team, as they see the figures and know who was on that day.

Another key change was a greater focus on the chronically infected cows to reduce their number in the herd. The monthly reports are valuable in identifying these cows early.

“Acting early is key. If you get in early, there is a chance she will get better,” he says.

James Hanks of Pan Livestock Services adds that his benchmarking data shows if a cow has two consecutive high SCC tests (more than 200,000/ml), there is only a 17% chance that she will be clear by the third NMR sample.

“Therefore, you need to do something with them,” he says.

Mr May stresses that this is not about blanket treating cows – if she is in later lactation, drying off may be the approach.

He calculates that he is getting an extra 0.3p/litre because of the improvement, which across 3m litres equates to £9,000-10,000. And this is just one aspect of improving herd performance.

Mastitis cases have fallen from 103 cases for every 100 cows down to 73. “It’s about paying attention to the udder before putting the cluster on. And all staff have bought into it.”

But it is a continuing process, with the monthly DEW reports acting as an early warning. “The monthly reports help identify places to look if there is a problem. You can study the data and see where it is going wrong.”

For example, there was a recent blip with an outbreak of E coli mastitis. “A review with Mr May resulted in more focus on ensuring the teat ends are clean, plus more lime on beds. In the past, we would have lost cows, but we didn’t this time through earlier intervention.”

A halving of concentrate use and big improvements in fertility are some of the many benefits seen by Becci Berry, who was one of the first to join the DEW group.

She also invested in regrooving the loafing area used for bulling and improved the lighting in the cubicle shed with 200 Lux LED lights.

Two years on and the herd is now in the top 25% for all KPIs, except conception rate, says Pan Livestock Service’s James Hanks.

Calving interval is falling and the current annual figure is 436 days, with the past three months being below 400 days.

In addition to pedometers, herdsman Mark Boylan (pictured above, right) went on an AI refresher course and brushed up on his technique.

Another consequence of the pedometers and integrated parlour recording system was to refine concentrate feeding rates to yield through the in-parlour feeders.

“We’ve seen a big saving on concentrate use – it was effectively halved. Cow production has gone up from 7,700 litres last year to the current 8,900 litres.”

She concludes by stressing it has been a team approach. Every two months, vet Alex McPherson, nutritionist Richard Greasley of ForFarmers and the herdsman all meet up to review herd performance and plan.

“Before joining the DEW group, this didn’t happen. The vet can now discuss any issues with the nutritionist.”