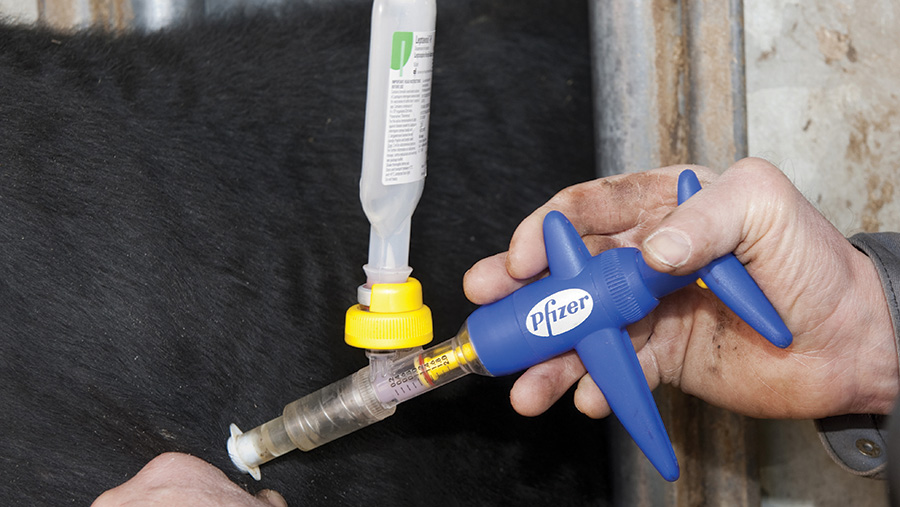 Dairy farmers risk creating a “vulnerable population” if they stop vaccinating cattle against endemic diseases in an attempt to cut costs.

Under pressure dairy farmers are increasingly questioning the necessity of vaccinating against leptospirosis and infectious bovine rhinotracheitis (IBR) in a bid to save money, vets told Farmers Weekly.

Faced with extremely low milk prices, farmers are looking to cut costs, and at about £5 a cow a year, leptospirosis and IBR vaccinations present a significant potential area of saving, vets admit.

However, they warn the long-term risk to herd health is “huge” and that there are other areas where money should be cut first.

“We have had dairy farmers in the past who have decided to stop vaccinating, particularly against leptospirosis,” says Neil Laing from Clyde Vet Group in Lanark, Scotland.

“It’s understandable because the milk price is on its knees. They’re looking at all their costs and all they see is that the cost of vaccinating is ‘X’ pounds a year.

“Medicine spend is not a huge cost overall, but they’re trying to cut costs in all areas. Average spend is about £80 a cow a year, so if they can save £10 that’s huge,” he says.

In the past two years, Wendy Welford from Clevedale Vet Practice in Upleatham, North Yorkshire, has seen four dairy farms – 8% of the practice’s dairy clients – choose not to continue vaccinating against leptospirosis.

“In the long-term, as the historic vaccine protection wanes, the herd will be at risk of infection, which could result in reproductive losses and severe milk drop”
Wendy Welford, Clevedale Vet Practice

Another farm is contemplating stopping vaccinating against IBR, she says.

“Over the past two years farmers have seen a drop in their milk price of up to 45%,” says Mrs Welford. “This obviously means there is less money in the bank and farmers have to prioritise what they spend on.

“I often think of vaccinations as a form of insurance that farmers take out against disease.

“If used in a prevention situation it may be that the farmer has never suffered any losses from the disease that he is vaccinating against and therefore he may decide on a cost benefit analysis that he can afford to omit the vaccination and improve biosecurity to ensure that the disease does not enter the herd,” she says.

“In the short term the benefit is obviously cost saving in the form of money saved on vaccine purchase and also labour costs associated with administering the vaccine.

“In the long-term, as the historic vaccine protection wanes, the herd will be at risk of infection, which could result in reproductive losses and severe milk drop.”

David Campion from Priory Veterinary Centre in Newton Stewart, Scotland, says it a conversation he has regularly with farmers.

Dairy farmers risk creating a “vulnerable population” if they stop vaccinating against IBR and leptospirosis in a bid to save money, Mr Campion warns.

“If you drop leptospirosis you might not see an immediate problem,” he says. “But it wouldn’t be long before you did.”

“The potential consequences of having both these diseases back in the herd are huge. Our advice would be that it is not worth it for the sake of £5”
David Campion, Priory Veterinary Centre

Mr Laing agrees: “There probably wouldn’t be many short-term consequences to stopping vaccinating against IBR and leptospirosis because there will be a background of herd immunity.

“But reasonably quick – within a few months – you’d start to see IBR coming back into the herd. With leptospirosis, in our experience, it takes a couple of years to rear its ugly head.

“The potential consequences of having both these diseases back in the herd are huge. Our advice would be that it is not worth it for the sake of £5.

“We’ve seen evidence that trying to save a few pounds in the short term can hurt you in the long run,” he says.

“Most will decide against it, but it gives us an opportunity to talk to them about dry cow therapy and other ways they can save money without cutting out vaccinations.”