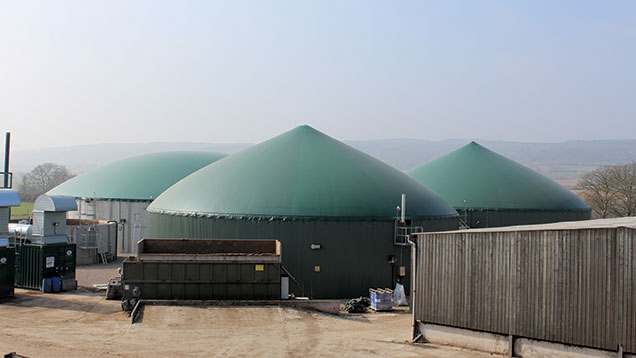 Having dealt with unpredictable milk price and TB for years, it was the promise of a stable income that first attracted the Hunt family to anaerobic digestion (AD).

Fed up with being unable to plan ahead, Jim Hunt was drawn to the 20-year guaranteed income available by generating electricity from the slurry produced by the farm’s 420-cow dairy herd.

“We could have either increased cow numbers or put in AD and AD was the safer bet. It meant we weren’t relying on the dairy and were avoiding putting all our eggs in one basket,” says Jim who farms with his son Will at Plusterwine House, Woolaston.

After extensive research, the family installed a 500kW AD plant in December 2013. This has enabled them to save £20,000/year in energy costs by producing their own electricity, while also receiving a significant additional income (see “Key figures: Plusterwine House AD plant”, below).

They are also trialing a novel approach where they use excess heat produced by the plant to dry maize silage which is then used as cattle bedding.

Payments for energy produced from one 500kW engine installed in 2013 (excluding costs of which maintenance costs are substantial).

Anaerobic digestion is a natural process where organic matter is broken down by bacteria in the absence of oxygen to produce gas which can then be converted into electricity by an engine.

AD plants typically combine slurry with an energy crop such as maize to produce the gas.

The government will then pay Feed-in Tariffs (FiTs) a kWh for the electricity produced which is guaranteed from the date of installation for up to 20 years and is index linked.

Additional income can also be received for selling electricity into the national grid.

After carrying out a feasibility study, the Hunts chose to invest £2m in a digester with the capacity to produce 850kW.

Over the past 15 months they have been producing 500kW/hour while waiting for the electricity grid to be upgraded. An additional engine is now being added to increase output to 850kW.

Will says the significant income already seen and the potential to increase returns further means the diversification has helped protect the family’s future.

“It is a massive investment, but with the current fluctuations in the milk price, I’m so pleased we’ve done it,” he says.

Situated in an excellent maize growing area on the banks of the Severn, the farm was in an ideal location to produce maize as the energy feed for the digester.

“We have taken on an additional 121ha of maize, which is either grown on rented ground or bought as a standing crop for use specifically by the AD,” says Will.

The herd, which yields 9,800 litres a cow a year and is housed all year round, is fed maize and grass silage produced from the 242ha home farm.

However, Will says the digester now takes priority and should land availability become limiting the farm would consider reducing cow numbers.

Daily labour requirements for the plant have been absorbed by the existing farm team, with the time taken to “feed” the digester amounting to about four hours a day.

Will has carefully calculated exactly what to feed the plant to yield the maximum amount of gas, as efficiently as possible.

This has involved buying in greater amounts of chicken muck, which produces high volumes of gas. In fact 1t of chicken manure can replace more than 1t of higher cost maize, which makes it more cost effective.

To further enhance the efficiency of gas production, the business has also opted for two linked digester tanks each of 2,400cu m in size, rather than one. This means they can feed more chicken manure and collect the maximum amount of gas.

Since the AD has been installed, Will says they have also been able to make better use of nutrients. Following a retention time of 120 days, the used digestate goes into a storage tank and can then be separated.

“The solids are high in P and K and the liquid high in nitrogen so we target them at the ground that needs it based on soil analysis,” explains Will.

Will says the fact the digestate produced is less volatile due to the removal of ammonia means it is more available to the grass plant and consequently has resulted in a 60% reduction in artificial fertiliser use. The AD process also means the smell of the digestate is reduced.

To further enhance income, the business is also in the process of signing up to the government’s renewable heat incentive (RHI).

This pays for any heat produced from the AD engines that is used for an industrial process, separate to the plant itself.

Jim explains: “We’ve installed a drier and we are drying the maize and using it as cattle bedding. We currently buy in straw for bedding so if we can replace this with a home produced product, we can reduce our costs.”

It’s early days, but at present the dried maize is being used in loose housing used for youngstock, beef cattle and fresh calvers. The plan is to also use it in cow cubicles.

Will also believes the introduction of the digester means cows are now receiving better quality maize in the diet as any spoilage is being fed into the digester.