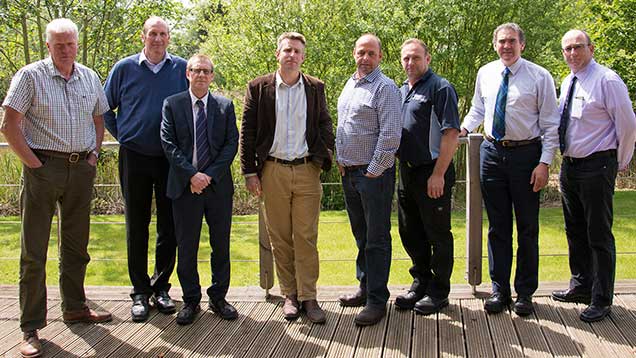 A cross-industry group has been formed to investigate the dairy downturn.

It aims to create solutions for dairy farmers to cope with the price volatility that is becoming the norm in the sector.

Farmers are being forced to sell milk below the cost of production and many are struggling to see a future in the industry.

However, the group has formed a “task and finish” team to work on a number of initiatives to help farmers alleviate risk.

The NFU, NFU Scotland, NFU Cymru, the Tenant Farmers Association (TFA), the Country, Land and Business Association (CLA), Farmers For Action (FFA) and the Royal Association of British Dairy Farmers (RABDF) have all signed up.

Representatives from these farming organisations held their second meeting at NFU headquarters in Stoneleigh, Warwickshire, on Wednesday (27 May).

Liam Fenton, from INTL FCStone, gave a presentation on the role of futures trading in the dairy sector.

The delegates then discussed a number of initiatives available in other parts of the world. In the US, the government-backed Margin Protection Scheme supports dairy farmers in volatile times and in New Zealand, Fonterra offers their farmers a guaranteed milk price scheme.

Closer to home, in Ireland a number of milk co-operatives have brought in fixed-price, fixed-term contracts and uptake by farmers has far outweighed availability.

Milk contracts and pricing schedules can also be used to reduce risk in-between farmer and processor.

“A and B contracts could be a way of managing volume going forward, but need to be developed in discussion and with agreement from farmers, with a clear way to appeal any decisions made.”

The task and finish team will look to provide guidance on best practice with A and B contracts so that farmers can question their milk buyers’ intentions.

The group would also like to see an increased use and uptake of new, innovative tools, such as those on formulaic contracts, cost of production plus retailer contracts or on longer-term pricing arrangements. These could “help balance the price risk between farmer, processor and end user”.

Ultimately, the group will aim to build more transparency and trust into the UK dairy sector. The first step to achieving this is through farming representatives working together on a common goal.

TFA National Chairman Stephen Wyrill said: “There is no current sign of recovery in dairy markets and drastic action will be needed for dairy farming to have a viable future in this country.”