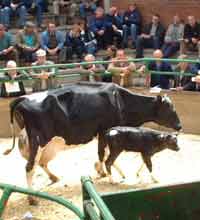 The rise in milk prices and strong demand for culled cows has given an added boost to the dairy livestock market in what has been a good year for the industry.

“The markets are as strong as we have ever had them. In spring 2011 we were at a low point. Trade was more difficult because of the drought. The upturn in corn prices didn’t hit home until April, but it has been going up since then, with averages as high as they have ever been.”

The cull cow market has been driven by a number of factors, not least a high demand for export to Europe. This has been influenced partly by a shortage of cows on the continent, but also by the strength of the euro against the pound.

In the UK, demand has also been high, particularly for home-reared animals, again because the currency differentiation has made imported animals more expensive.

Mr Norbury says Bluetongue has also been a factor in making UK-reared animals more attractive to the European markets. In June 2010 the UK was declared a lower-risk zone for BTV8, and in July this year the country was declared to be Bluetongue-free, raising it to the highest status within the EU, higher even than the main exporting countries of Germany, Holland and France. The rules also dictate that if an animal is vaccinated when pregnant, it can’t enter the UK.

And milk prices, both in Europe and the UK are a key factor in bolstering dairy livestock sales, says Mr Norbury.

Mark Bromell, of Kivells in Holsworthy, Devon, reports a very busy spring this year, with many dispersal sales leading to a slight easing in the trade, albeit still producing good averages.

“The cull trade has been strong, and the calf and store cattle trade has been very strong in the livestock markets. The milk price rises that we saw in the late summer strengthened the market further.”

There are still a number of dairy farmers leaving the industry, and in order to see this trend fully reversed there needs to be a rise in milk prices, followed by stabilisation, he says.

“The South West, for example, is not seeing the rises that some other parts of the country have seen. There is a general feeling that the industry needs to see further milk price rises.”

Mr Bromell says future trade is looking very stable, with supply and demand in balance. However, dispersal sales do not look so plentiful because there are less dairy farmers left to disperse.

“I would say the overall belief is that we are more and more linked to the price of milk.”

Chris Dodds, executive secretary of the Livestock Auctioneers Association, says that besides the availability of animals, the price of newly-calved animals was heavily governed by two factors; the price of milk and the price of cull cows.

“There is clearly a shortage of supply. You have to take into account the fact that between 30,000 and 40,000 animals are taken out of the system every year because of bovine TB alone.”

He says there is a lot of pressure from within the agricultural industry for sellers to be given a realistic price for their milk, in order to encourage farmers to reinvest in their businesses and make dairy farming sustainable in the UK.

“The milk buyers are coming under more and more pressure to pay a realistic price. If they want to see a healthy dairy industry in the UK, prices paid have to be relevant to the cost of production. A declining industry will only lead to shortage of supply which in turn will drive prices upwards. We have already seen this happen in the beef and sheep markets.

“The move towards sustainable pricing has already happened in other parts of Europe where they have realised the price has to be right for the dairy industry to continue. We are very much a part of Europe, as far as the dairy industry is concerned, with some of our biggest markets for cull animals being in France and Germany,” he explains.

“At the moment the auction markets are leading the trade. We have competition from outside, but it is this competition that gives strength to the business. It is only by selling on the open market that farmers can know what their cows are really worth, and get their true value.”