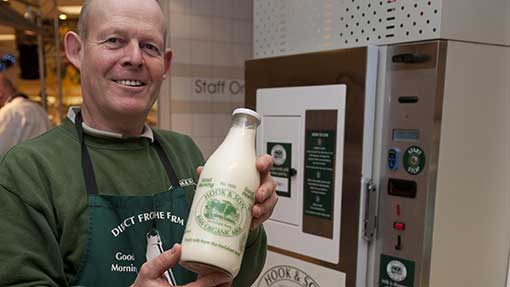 Raw milk producer Stephen Hook has accused Dairy UK of failing to represent all dairy farmers because of its opposition to unpasteurised milk.

Mr Hook has been selling organic raw milk products from his Longleys Farm in Hailsham, Sussex, since 2007. He had also been selling raw drinking milk (RDM) from vending machines in Selfridges’ London store.

But last May he agreed to stop selling raw drinking milk (RDM) to non-farm premises after the Food Standards Agency (FSA) accused him of breaching food hygiene regulations and threatened to prosecute him . The case was eventually dropped.

The FSA hosted an open meeting to discuss the “Future of Raw Milk Regulation” at the Congress Centre in London last week as part of a 12-week public consultation which runs until 30 April.

The meeting, attended by more than 150 people and dubbed “central” to the FSA’s consultation, heard presentations from raw milk farmers, scientists, consumers and campaigners.

“Our position is heavily reliant on data the FSA has collated. We believe that all liquid drinking milk should be pasteurised,” she said.

“Raw milk does pose a serious threat to human health and even though hygiene practises can reduce the risk they cannot completely eliminate it.

“International and UK data show that the ban and restriction on raw milk sales have an effect on the incidence of illness associated with the consumption of RDM.

“Dairy UK appreciates there’s been no reported outbreaks recently or illness but this doesn’t mean they didn’t occur and were unreported, or that they will not occur in the future.”

But Dairy UK’s representative remained seated while giving their position on the review of raw milk controls.

Speaking after the meeting, Mr Hook accused Dairy UK – the “united voice of the dairy industry” – of failing to represent all dairy farmers.

“Considering it was Dairy UK who called for a ban two years ago, it was shocking they didn’t send someone to really fight their corner. And for Dairy UK to say it represents all dairy farmers is laughable,” said Mr Hook.

Professor Sara O’Brien, chairman of the Advisory Committee on the Microbiological Safety of Food, also concluded milk for human consumption should be pasteurised to ensure its safety.

“Where milk that was sold as pasteurised has been implicated in outbreaks, it’s because there has been a failure in pasteurisation. Effectively the consumer was drinking raw milk when they thought they were drinking pasteurised,” she added.

However, speaking on behalf of raw milk consumers, Peter Campbell-McBride said farmers in this country who produce RDM were some of the most responsible and professional people you will ever meet.

“The consumer is well informed; before they choose to drink it they’ve done their homework. They’re very safety aware and not going to put themselves at risk,” he added.

Mr Hook also spoke up for raw milk producers and said he hoped the FSA would use the meeting positively and that it was not just a PR exercise, when behind the scenes any decisions were already a “done-deal”.

He wants to see RDM sold in shops, directly from the farmer to the consumer.

“It’s important to keep the food chain short to eliminate risk. If raw milk is sold in shops, the farmer should be responsible for his own milk and accountable for hygiene,” he said.

“The responsibility should not go into third party hands and it’s important the farmer retains control of the price.”

While Mr Hook said there is certainly a place for pasteurisation when looking at tuberculosis, he believes the public should have the choice to buy raw milk from high quality producers.

The FSA’s current proposal is to allow farmers to continue to sell raw milk to consumers from their farms or farmers’ markets.

Steve Wearne, the FSA’s director of policy, told the meeting the government body was looking at bringing in sales and health warning labelling of other species RDM in line with cows’ regulations, limiting the sales outlets currently permitted.

According to FSA figures, there has not been reported illnesses associated with drinking raw milk in the UK since 2002. Since then, in excess of 10 million litres has been consumed.

However, opponents insist that the pasteurisation of milk is necessary because it eliminates many health risks in milk, especially tuberculosis and brucellosis and deadly pathogens such as E.coli and salmonella.