Dairy farmer Rob Green believes the ability to access a greater array of herd management data and see a problem before it happens has been one of the main benefits of moving to a robotic milking system.

Mr Green and his father Paul made the decision to install four robots on a greenfield site 12 months ago.

Faced with an outdated parlour and having outgrown their existing set-up, the move to robotics enabled them to expand to 250 cows and create a more sustainable, labour-efficient system. 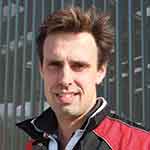 This has enabled issues to be picked up and addressed promptly. For example, cow rumination rates have been found to dip before or during the development of mastitis.

Milk conductivity levels can also change before any obvious signs of the disease. Consequently, these parameters can be used to pick up and treat problems promptly, potentially promoting better cure rates and less antibiotics use.

“We used to have an antiquated parlour and there wasn’t anything other than good stockmanship that flagged us towards a sick cow. The technology notices an issue regardless of who the person is and the concentration on the job,” he said. 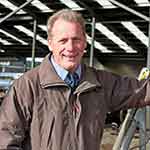 The farm’s nutritionist, Tim Gelfs from Mole Valley Feed Solutions, looks at rumination patterns with Mr Green twice a month and says this data is particularly useful as a ration-monitoring tool.

Rumination rates and chews a cud are picked up on a microphone attached to individual cow neck collars. Target rates will be herd specific, but generally cows should ruminate for 400-600 minutes/day and chew 50-plus times a cud.

Mr Gelfs said: “If there is a low rumination rate, the chances are there is something going on at the feed fence. Earlier in the year, we swapped from a clamp including a mix of first and second cut to a clamp of just first cut. That’s when we saw rumination start to drop.”

This dip in rumination acted as an early warning sign of sub-acute ruminal acidosis (Sara), enabling tweaks to be made to the ration before any marked decreases in intakes and yields.

“The rumination rate data allowed us to pick up on Sara before it went clinical and to counteract issues before we saw a milk drop.

“From a nutritional point of view, rumination monitoring is the main benefit of the robots. The data allows you to ask the right questions,” added Mr Gelfs. 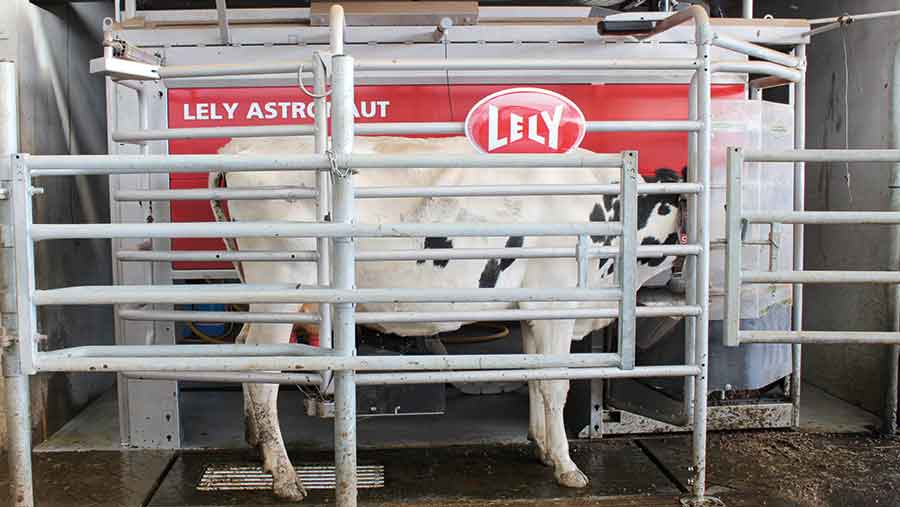 As a result, the amount of first-cut silage – which was high in lactic acid – included in the diet was reduced and a buffer was included.

Mr Gelfs believes rectifying issues and promoting rumen health has a particularly beneficial effect on cow health and fertility, as cows face fewer challenges and are likely to come bulling and cycle better.

This fits well with the farm’s drive to improve fertility, which is aided by the use of activity collars.

The fact cows are weighed at every milking also enables any subtle changes in weight to be picked up promptly.

This can be an indication of health problems or can be used as part of ration management. For example, Mr Gelfs combined this information with cow metabolic blood profiles carried out in August.

This showed that cows were slightly deficient in energy, but not losing weight, suggesting the issue was more due to the rumen health challenge seen at the time.

To promote consistent feed intakes, the Greens have also installed a curtain down one side of the shed, which is linked to a weather station on the roof.

High wind or rain cause the curtain to automatically shut. This prevents adverse conditions from stopping cows going to the feed fence or rain from affecting ration dry matter levels. Feed is also pushed up eight times a day.

“The job has changed and everyone must have larger herds to survive, so knowing the detail on individual cows becomes harder, unless it is recorded or automated,” he said.