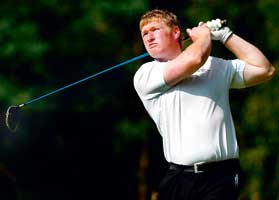 You’re 26, farming’s in your blood, you enjoy it, you’re all set to inherit the farm that’s been in your family for 60 years – but life has also handed you the inconvenience of another prodigious talent.

Such is life right now for Will Bowe, only son of John Bowe, who in the next few years has to decide between taking over at Hunday Farm in Cumbria and life on the European golf circuit.

For the time being, Will is managing to juggle life at the dairy farm on the outskirts of Workington with his burgeoning role as an ‘icon’ of Cumbrian golf.

But while he’s fully committed to the farm and can live with the tug-of-love which has developed since his golfing prowess became evident 12 years ago, his lifelong dream of going pro is getting ever nearer.

Currently on a handicap of plus-three, Will started playing at the local course in Workington when he was about 10, having been introduced to the game by his uncle.

“I got hooked straightaway,” he says. “I loved it right from the beginning.

“But I was about 14 when people started saying I could play a bit and I began to enter junior competitions.” 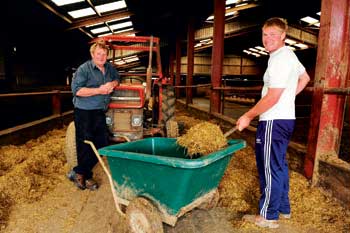 Father and son: John Bowe has been supporting son Will’s passion for golfing.

He’s been improving ever since. Will played in both the Under 16 and Under 21 England squads, was Cumbria matchplay champion 2001 and 2006 and is this year’s strokeplay champion – a title he’s won four times previously.

Will has had his best year in golf this year, winning the Northern Counties individual championship at Seascale – his performance helping Cumbria become overall team winners for the first time in the competition’s 54-year history.

He also helped Cumbria win the Northern County Championship title for only the second time when they defeated Lancashire 11½-6½ in the final match at St Helens on 29 August.

He knows that the problem with improving all the time is that it has landed him on the horns of a dilemma.

“The problem I’ve got now is that I like working on the farm and am having to contemplate giving it up,” he says.

“I still do a lot of work on the farm and – even though it’s hard – I don’t mind it one bit because farming’s not like anything else in that every day is different. I mean, I couldn’t work in a factory. And you have the fresh air too.”

Will’s especially reluctant to leave because he knows he owes his father so much. “Dad’s been a massive help by backing me financially,” he says. “He’s good with us because he lets us go and play golf whenever I want, but it’s only about three times a week, not every day, and I know I need to practise every day if I’m going to realise my potential.”

Recently, Will took a giant leap when he applied for his European tour card. “There are so many hoops you have to jump through, and it will be very hard, but if I am successful then I could end up being able to play in pro tournaments abroad.

“If it doesn’t work out, then hopefully I can come back to the farm.”

Unusually for a player of his ability, Will has made it this far without the support a lot of other golfers take for granted.

“I’ve had a little bit of help on the way apart from Dad, but nothing like some players get,” he says.

“Some of the players these days have sports psychologists and short game and long game coaches – whereas I’ve done it all on my own.”

John Bowe, 61, is ready to hand over to Will in the next few years, but knows his son may not be there to take over.

“The problem we’ve got is that, although I have two daughters, Will is my only son and the one who’d take over the farm,” he says.

“I’ve backed him all the way ever since he was about 12, but there’s got to be a stopping place. It’s come to the point where I’m not far off retirement and I need to know one way or the other what he wants to do.

“I haven’t put him under any pressure. I want him to make his own mind up and make the right decision. I know he likes farming but his heart’s in golf if he can make it.

“When I was younger, my father would have said I was barmy to try to be a golfer but things have changed since then and if that’s what he wants to do and he can make a living out of it, good luck to him.”

John, who lives in Hunday’s main farmhouse while Will lives in a nearby agricultural bungalow, adds: “I’d like him to carry on farming, but I’d also love him to qualify and become a pro. That’s his ambition. If that happens and it’s a case of selling the place, so be it. I don’t want to, I’d like to think he was going to carry on, but if he prefers to make a living at golf – and I don’t blame him – I’d accept it.”

Tom Stout, president and secretary of the Cumbria Union of Golf Clubs, says of Will: “He’s an iconic figure for us. Our top man.

“He holed from 96 yards to win his match against Lancashire [on 29 August].

“In June he shot an eagle, an albatross and two birdies in four holes.

“I think he has a chance to make it as a pro but whether he does or not is up to the man himself.”

Will knows that one of the things that he has to do more work on is his self-belief. “I think I need to get out there and see if I’m as good as folks say I am,” he says. “I don’t want to regret some time in the future not giving it my best shot.”