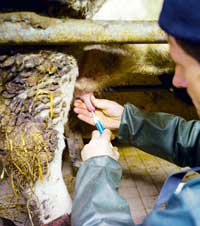 Whether we like it or not mastitis is something that occurs in every UK dairy herd to varying degrees. And while it is easy and often routine to supply cows showing clinical disease with antibiotics, is the pain of the disease ever taken in to consideration?

Antibiotics are undoubtedly important in the fight against mastitis infection, but if you were to ask any human female having experienced mastitis they would likely describe the pain as excruciating, says XL Vet Group’s director of farm issues, Andrew Davies of Dorchester.

“It is easy to underestimate how much pain cows may experience in even mild cases of mastitis and that’s why many cases are not seen as being painful when in fact they are. This means not only is cow welfare being compromised so too is production because the cow may be less likely to eat.”

Nonsteroidal anti-inflammatory drugs – or NSAIDs – not only do what the name suggests and reduce inflammation, but many also work to minimise pain associated with the inflammatory response. And while inflammation is a good and normal response to an infection, too much inflammation can lead to greater damage in tissues, says New Zealand vet Mark Bryan.

Mr Bryan was recently involved in a study looking at the routine use of the specific NSAID Metacam in dairy cows with mild cases of mastitis and found significant health, production, welfare and financial benefits.

“We found that by treating clinical mastitis with a combination of this specific NSAID and an antibiotic, the SCC compared to the control (treated with antibiotics alone) was lower and less cows were culled from the specific NSAID treated group,” he says.

“A reduction in SCC when cows were treated with this particular NSAID is the easiest to understand because cell counts increase as a result of mastitis as many of the inflammatory cells produced are white blood cells, measure by SCC. So dampening down this inflammatory response will dampen down SCC,” explains Mr Bryan.

But reduced culling rate is a harder one to interpret, he says. “Unfortunately, we didn’t measure reproductive factors and failures of these are a major reason for culling. So it is possible cows that were culled were less likely to get back in calf, or we’re getting in calf too late because we do know mastitis has a negative impact on reproductive indices.” 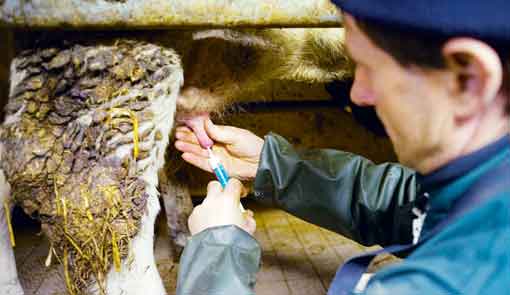 Mastitis causes a significant amount of pain in cows’ udders, something the targeted use of non-steroidal anti-inflammatory drugs can help counteract.

In addition, Boehringer Ingelheim‘s cattle vet adviser Laura Randall believes the reduction in culling rate from 28% to 16% in the Metacam treated group could also be due to indirect effects.

“It’s important to remember cows are calving down on an energy balance knife edge and when a cow gets mastitis it could reduce dry matter intakes thus having an effect on weight loss post partum and body condition score, which in turn could have severe a knock-on effect on fertility.

Poor fertility can often be a major reason for culling cows on dairy farms, adds Ms Randall. “So NSAIDs give cows the opportunity to keep eating well which maintains cows on the right energy balance.”

However, with any medicines there is a cost and while NSAIDs may have been reserved previously for more serious cases of mastitis, there is a financial benefit for using them on more mild cases for analgesic purposes, adds Ms Randall.

“In the study looking at the benefits of using a specific NSAID in mild cases of mastitis they found there was a return on investment of £58 because of the reduced culling rate and lower SCC. Using pain relief makes logical sense because it has a positive welfare implication and is backed up by the economics.”

But there could also be longer-term benefits of using NSAIDs in early cases of mastitis – particularly where young cows are entering the herd, says Ms Randall.

“Too often when treating mastitis it’s the high SCC cows that are tackled, but it’s important to look after young cows. When SCC are controlled they help prevent build up, particularly in these younger cows.

In New Zealand, the use of NSAIDs is increasing, which was partially the reason the study was conducted, explains Mr Bryan. “Farmers in New Zealand are regularly using NSAIDs post calving for calving-related problems, and the study was in part prompted by farmers wondering whether there would be a benefit in using it for mastitis.”

After six months of using the NSAID Metacam in cows showing clinical signs of mastitis, herd manager Gary Harding wouldn’t have it any other way.

“We have struggled to clear up mastitis completely in some individuals as the quarter would still be hard and swollen. We also saw about five foetal reabsorptions in mastitic cows in early stages of pregnancy as well last year,” he says.

And after consulting with Andrew Davies, a partner at west country veterinary practice Synergy Farm Health, they decided to use an NSAID in addition to antibiotic tubes. “The response was quite rapid when using NSAIDs as the swelling reduced more quickly and we also saw a faster response in the rate at which mastitis was cleared up.”

The cows also seemed to get back on form quicker and this was probably because of the analgesic properties of the medicine, believes Mr Harding. “In a high-yielding herd, averaging 10,500 litres, when a cow is sick and in pain it is easy for milk yields to drop.”

But it’s not just the drop in production that’s the biggest problem, adds Mr Harding. “The problem is when a cow drops a condition score from not eating, they can easily get in to negative energy balance and this can then have a knock-on effect on fertility, as we saw with the reabsorptions last year.”

And on welfare as well as financial grounds Mr Harding also believes NSAIDs should be used.

“Mastitis is obviously a painful condition, so on the whole welfare issue it seems right to help ease cows’ pain. But it also makes sense financially, because when you can keep a cow eating and not loosing condition, which in turn can impact on fertility and at the same time prevent such a rapid drop in milk yield, then it surely pays off. I will continue to use NSAIDs,” he says.