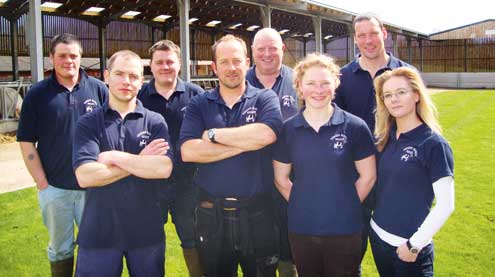 Three dairy farmers show how having protocols in place can help staff and herd performance.

Herd sizes are getting bigger on UK dairy farms and so inevitably are the teams of staff needed to run these units.

A typical 400-cow herd can be milked by six different people so maintaining consistency, whether in the milking routine, calf rearing or grass management is challenging.

Effective staff protocols can be key to achieving this goal. Farmers who have implemented codes of behaviour say they enhance the performance of both the workforce and the herd.

The most common protocols found on UK farms relate to milking procedures, calf rearing and the start-up and wash-down routine in milking parlours.

Two Kent producers explain how they have benefited from implementing guidance in some of these areas.

At the Henden Manor Estate farm in Kent, the introduction of a staff protocol on mastitis control has reduced cases from 75 for every 100 cows to 55.

When farm manager Diana Guitane joined the business, protocols were in place but were rarely followed.

Ms Guitane simplified the procedures, making them easier to follow, and every employee now adheres to them. She stressed the need to get staff to buy-in to concept of protocols. “It doesn’t matter how good a protocol is, it is of no use to anyone if it is not followed. They shouldn’t be complicated,” she says.

Protocols are detailed in a booklet and there is a written herd plan. The protocol for dealing with mastitis is included on a wall chart in the milking parlour, giving a step-by-step guide to dealing with infection starting with treating for three days through to discussing the problem with the farm’s vet if the infection is not cured during a set period of time. “Our recovery rates are much better and because we have a better parlour routine, again as a result of staff having a set of procedures to follow, we have much fewer cases,” Ms Guitane explained.

A protocol was applied to the milking routine and as a consequence the Bactoscan level has reduced from 25,000 coliform forming units (cfu)/ml to 10,000. Teats were previously pre-sprayed and wiped with paper towels but reusable wipes soaked in acid and detergent are now used, simplifying the process and making it faster and more effective.

A calf protocol makes it clear that milk must not be pooled to avoid Johne’s cross-contamination. There is also a set of procedures on the colostrum intakes of newborn calves.

Ms Guitane said the changes she has introduced are not major but have made a big difference to performance. They have also simplified the running of the dairy and made her job easier. “If I had to spend the first hour of every working day dealing with kindergarten stuff it would put me on the back foot,” she admits. “As a team we make time to work together; everyone’s input is important. If you can get staff working happily as a team it makes life much easier and protocols are an important part of this because everyone has the same rules to follow.”

Staff are incentivised, too. “When the profits hit a certain target the staff get a bonus so there is an incentive for them to do well. They are more likely to hit those targets if they know what they have to do,” says Ms Guitane. “We also share information on what treatments cost because it helps staff better understand why we do the things the way that we do.” 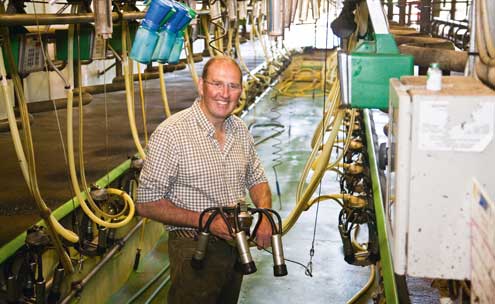 There was a dramatic improvement in mastitis rates in the 360-cow Holstein Friesian herd at Wintersell Farm, Edenbridge, Kent, when farmer, John Downing, implemented a milking protocol.

He employs four staff and was aware he needed to get them on board if cell count targets were to be achieved.

Pre-dipping with a foaming iodine dip and wiping teats with machine washable wipes before milking are now standard as is using a barrier dip post-milking.

Mr Downing has also installed a cluster flush in his 36/36 parlour and uses sand as bedding in the cubicle shed. But it is attention to detail in the parlour that has been integral in reducing mastitis to under 40 cases in 100 cows.

“I am very much hands-on and work closely with my staff so they are aware what routine needs to be followed. They are pretty motivated when it comes to keeping cell counts down.”

Foot health is another area that has improved after staff were encouraged to follow specific procedures.

Mr Downing was invited to become involved in the Bristol University healthy feet project as a long-standing supplier of milk to Marks and Spencer through Dairy Crest. Cows are walked through a footbath at least 12 times a week and animals that need their feet trimmed are flagged up.

For years the herd had been averaging 8,900 litres but since Mr Downing turned his attention to foot health and other health improvements, milk output is 10,100 litres although the feed rate has remained static. “Cows are more healthy and mobile and we are getting better conception rates,” he says.

“All the cows have their feet trimmed twice a year on a pro-active basis. The cost is not insignificant but the benefits are massive.”

The foot health protocol starts with the basics of the concentration of formalin and copper sulphate solution in the footbath to the number of times the footbaths must be cleaned. “The cows go through a pre-bath first and this is where they tend to lift their tails so this needs to be cleaned once a day. The second footbath is 20m from the first and this only needs cleaning every two or three days,” says Mr Downing.

The influx of foreign labour on British farms has created some communication issues, but protocols can help overcome these, according to Nuffield Scholar and Derbyshire dairy farmer Andrew Mycock.

It was an approach he learned when visiting Denmark during his Nuffield Scholarship study. The vast majority of migrant workers on Danish dairy farms are from the Ukraine and although English is the common language between the two nationalities, protocols incorporating pictures as well as text are standard.

“Written staff protocols were found on almost every farm I visited,” says Mr Mycock, of Flagg Farm, near Buxton. “As cow numbers and staff numbers on farms had grown the farmers found it impossible to be able to watch and direct all the employees all of the time. Standard operating procedures were very common, especially for less skilled migrant labour.”

On one Danish farm, all staff were issued with notepads and were required to give a note to the head herdsman at the end of each day detailing any equipment that needed attention, supplies to be ordered or animal health problems such as a lame cow. “It was then up to the head herdsman as to by whom or how the issue could be resolved,” Mr Mycock explains.

He has adopted some of the protocols he saw in action on his own farm where he milks 320 cows. “I have Polish workers and could spend a lot of time standing around telling them what to do but with written and photographic protocols they know what jobs must be done.”

Protocols take the guesswork out of jobs that need to be done on a dairy farm and ensure they are carried out as effectively and appropriately as possible.

According to DairyCo extension officer, Izak van Heerden, a team approach to protocols is essential and stresses they are as appropriate to small farms as big units. “It is a misconception that protocols are just for big herds, all systems can benefit, whatever their size.”

A study conducted in 2004 confirmed that if a milking protocol is in place, staff will get 47 cows milked in an hour in contrast to 36 milked through the same parlour if no protocol exists.

Milk flow rates are also quicker if there is a protocol for stripping and wiping teats. “A stimulated cow will produce 2.1 litres of milk a minute instead of 1.8 litres and the overall yield a milking will rise to 10.8 litres from 10.4 litres. It demonstrates that cows will produce an extra half a litre of milk just from being stimulated sufficiently,” says Mr van Heerden.