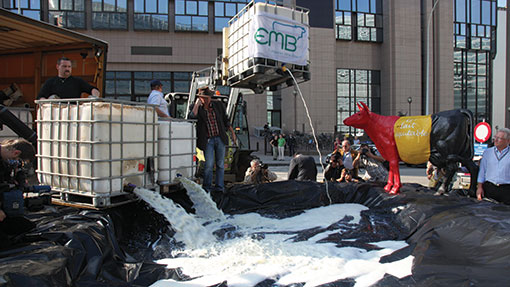 The European Milk Board (EMB) is demanding immediate action from EU politicians to counteract the dairy market crisis.

The EMB is calling for the application of a market tracker to warn when a crisis is imminent so supply can be adjusted according to demand.

If the programme came into force, farmers could face levies for going over production and receive bonuses for voluntarily scaling back.

The announcement was made at a recent EMB board meeting in Brussels, where committee members expressed their deep concern about falling milking prices across the EU.

The EMB is a lobby group that campaigns for milk producers across 14 member states.

Farmgate prices have fallen to 30c/litre (24p/litre) in Belgium and just 16c/litre (13p/litre) in the Baltic States. Further price pressure is expected in coming months, with some dairies already announcing further cuts.

EMB president Romuald Schaber described recent developments as “dramatic”. He added: “It can’t continue like that – production has to be reduced. The sector cannot accept milk prices that threaten farmers’ livelihoods.”

The board said it would present its proposals to MEPs and the European Commission.

Under the proposal, an index would be introduced that tracks farmgate milk prices and production costs. The index would act as an early warning system to predict when a crisis could be close.

If the index fell by 15%, a restraint on production of at least 5% would be introduced and farmers would receive bonuses of up to 24p/litre for voluntary reductions in production. Those failing to comply would be made to pay a levy up to 120% of milk price for every 1kg of extra milk they produce.

If the index fell by 25%, an obligatory reduction of 2-3% would be set for a defined period.

However, NFU chief dairy adviser Sian Davies said the union could not support such tactics.

“Actively decreasing milk production in the UK, or across Europe, is a very dangerous tactic to improve milk prices.

“If this was to happen, it would allow other areas of the world to supply the increasing demand for dairy products without competition, effectively ruling ourselves out of export opportunities,” Ms Davies said.

“During this age of increasing volatility throughout the supply chain it is important we make tools available to farmers to help them support their businesses, without compromising the UK’s position as a strong supplier of high-quality dairy products.”