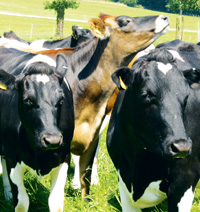 A Somerset farmer who was trampled by his herd of cows after they were spooked by a fire engine siren has died.

Dairy farmer Harold Lee, 75, was riding a quad bike behind his 100-head herd of Holstein cattle as he and his son, Richard, were taking the animals to be milked at Robins Farm in Burtle.

The cows became agitated when a fire engine appeared in their path.

It was forced to stop which the Lees tried to move the cattle, but they stampeded back towards their field, leaving Mr Lee senior with severe head and chest injuries.

Mr Lee was airlifted to Royal United Hospital in Bath before being transferred to the Frenchay Hospital in Bristol.

Following the incident last week (11 August) Mr Lee’s son, criticised the fire crew for leaving the engine’s sirens on and startling the cattle.

He said his father had been following the herd as he had done for 50 years and had got off his quad bike to make sure the cattle did not damage a car which had come up behind them.

“We understand they were trying to get to an accident but there was no need for them to have their sirens going,” he told the Daily Mail.

He said he asked the driver of the fire engine to turn off the siren so the cattle could be calmed and moved.

An Avon and Somerset Police spokesman said the incident was being investigated and the possibility the cows were frightened by a fire engine was one line of inquiry.

The latest death is one of several caused by cattle in recent months.

In June, vet Liz Crowsley was killed by cattle while walking her dogs on the Pennine Way, while former home secretary David Blunkett was injured by cattle in the Peak District while walking with his guide dog.

A pensioner was also killed by a herd of cows as she walked her dog across a farmer’s field in Cardiff last month.

Despite the spate of tramplings, such attacks are rare.

In the 10 years to March 2006, the Health and Safety Executive investigated just 46 cattle attacks, seven of which resulted in deaths.

When cows attack: Are farmers liable if their cattle attack walkers?