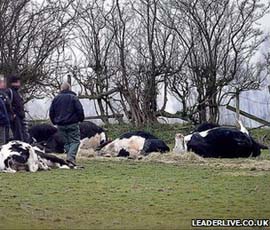 A livestock farmer is facing court action after about 30 of his cattle were shot after they had repeatedly escaped.

Police were called when de-horned cattle got loose from land in Chirk, Wrexham, and were found in a road and trampling people’s gardens on Friday morning (11 March).

The animals were shot at a farm the following day over fears for their welfare, Wrexham council said.

Andy Lewis, the council’s chief housing and public protection officer, said the livestock were destroyed to prevent them from suffering and being distressed further.

“The incident may result in court action being taken against the owner of the animals and no further comment can be made at this time,” he told the BBC.

Ian Roberts, a county councillor from Chirk, said the cows had escaped repeatedly over the past week.

“They had been pushing through people’s gardens,” he said.

“There have been old-age pensioners trying to get them out of their gardens at six o’clock in the morning.

“They were getting out wherever they could.”

Mr Roberts said some residents had been concerned about the way the cattle had been slaughtered but he believed it was necessary “for the protection of the public and the welfare of the animals”.

“They hadn’t been de-horned,” he said.

“Somebody trying to get them out of their garden in the pitch black could easily have been stabbed.”

• Should the cattle have been destroyed? Have your say on the story in the FWi forums