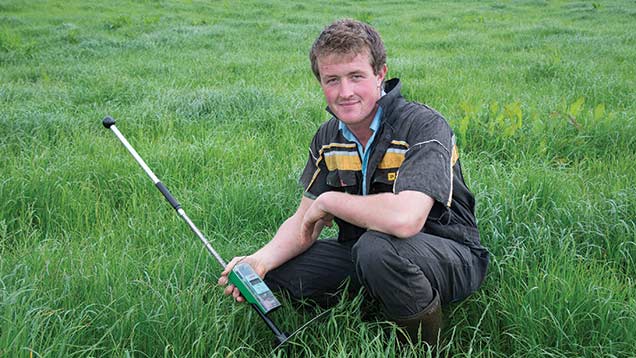 Continued excellent (wet) summer conditions have seen us growing twice the amount of grass in July compared with 2014.

Despite slow spring growth, so far we have grown 9t DM/ha of grass, putting us considerably ahead of the same point last season.

The one downside of the wet weather has been trying to make silage in conditions that have, at best, been fairly “catchy”.

Thanks must go to our local contractors who have been incredibly flexible, returning a number of times to pick up grass between the showers.

With silage stocks now bulging, the summer has provided us with a great opportunity to do some re-seeding. All being well, these paddocks should be ready for grazing towards the end of August, just in time as we start to push out the grazing round for the autumn.

Recently we spent some time finding out more about the spring calving index – which ranks bulls for UK grazing systems.

This was, by chance, then followed by a discussion group conversation around the merits of using economic breeding index – the Irish equivalent.

In both instances a robust defence of each was mounted, suggesting that it may largely be down to personal preference as to which is more suitable.

Either way, we will be taking both into consideration in selecting bull teams for next breeding season.

Presently, our Hereford stock bulls are coming to the end of their mating period.

They have been uncharacteristically well-behaved for a bunch of testosterone-filled brutes.

Credit to their breeders in the North East for producing such good natured bulls – we will most definitely be returning for more in the future.

Finally, with this being my final column, it only remains for me to say a massive thank you to Farmers Weekly for giving me the opportunity to write these pieces.

It has been a privilege to have be given the chance to recount what we get up to on the farm, and I only hope that it has, occasionally, been of some interest to others.

Best of luck to those taking on the baton of writing the Farmer Focus column, and fingers crossed for a happy and successful remainder of 2015.

George Brown won the Farmers Weekly Apprentice in 2012. After a stint working on dairy farms in New Zealand he has returned to the UK and is now managing the 330-cow dairy herd at Cairnhead Farm on behalf of Robert Craig.