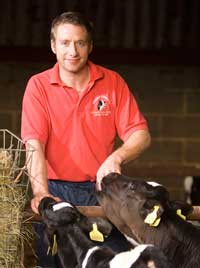 I had a fantastic evening at the Farmers Weekly Awards, it left me enthused and motivated to go on and do bigger and better things. It was nice to see the industry talk itself up and to meet lots of like minded, optimistic people, which was a pleasant change as on the ground, people are genuinely pessimistic which harms the industry’s public image.

We have had some bad PD results which I’m hoping is down to poor maize silage that I fed between old and new crop. Intakes dropped dramatically, but the damage seems to have already been done before I changed onto new crop.

Intakes now are exceptional with the high yielders eating nearly 60kg a head. This has been helped by some lovely, square bale clover/ryegrass silage. I will be making more square bale silage next year as it seems to preserve and store better and is more flexible to feed. Everything after first cut will be square baled as clamp space will be limited.

I’m anxiously awaiting our first contract bull calf which is due this month. The vets number is on speed dial, but fingers crossed he won’t be needed.

Spot milk prices in Northern Ireland seem to have risen quickly; I wonder how long it will take for these to filter down to farm level? I also hope our European friends have no success in their lobbying to rein in milk quotas as market forces seem to be working.

Back on the farm, Ickle, our little two month premature calf is striving and has graduated up to the big calves’ barn thanks to my wife Emily and mum Helen. Now my porch just whiffs of smelly boots rather than messy calves.