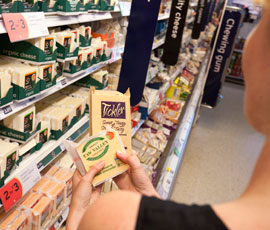 Consumers could soon see for themselves the vital work dairy farmers do in producing their food by scanning QR codes placed on the side of cheese packaging.

This is because Farmers on Film has launched a competition at this week’s International Nantwich Cheese Show to challenge cheese makers to use QR technology to promote the good work of farmers.

By using smartphones to scan the codes on packets of cheese they are about to purchase, shoppers will be taken to short videos clips of the dairy farmer who made it.

“A few shots of beautiful countryside and fresh food will ensure the purchaser will have a greater understanding of where their food comes from,” said local food producer Sarah Gayton, of the Taste of Moorlands bakery in Leek, Staffordshire,

Ms Gayton came up with the idea for the competition following the success of Farmers on Film, an award-winning series of short video profiles starring farmers and food producers from Staffordshire, launched prior to the Olympic Games to promote the use of British produce at the games and support the Red Tractor.

Richard Paul, chairman of the International Cheese Awards, said the competition was “very exciting” and would help producers aid traceability to any product.

“With so many dairy farmers diversifying, these QR codes could help to market their new products which is so important and will hopefully add value instantly to their enterprise. Ensuring public confidence in our food is also important,” he added.

Farm minister David Heath said: “Farmers on Film is a brilliant concept which will connect shoppers with the people who made their food, as well as promoting the British food and farming brand.

“I’m looking forward to walking into a supermarket and scanning my shopping with my mobile phone to find out where it came from.”

Eunice Finney, vice-president of the Women’s Food and Farming Union, said: “As an organisation we support Sarah’ ideas, as our motto is ‘Linking Producer and Consumer’, we will work to support Sarah and help encourage competition entries.”

Anyone wanting to enter the competition will need to email Sarah Gayton for details, which will be issued by 1 October 2013.