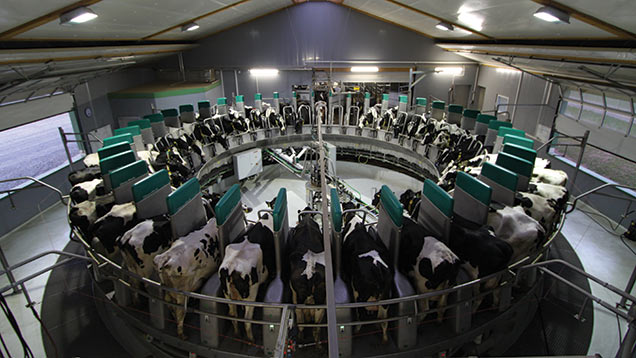 DairyProQ is the only robotic rotary on the market that is equipped with individual robotic arms at each stall.

Each robotic module handles every step of the milking process including teat cup attachment, pre-diping, pre-milking, milking and post-diping in one single attachment.

The unit then automatically removes and back flushes between milkings to clean the clusters.

The revolutionary equipment was unveiled in Teichroda, Germany, last week (19 June) where Eckehard Bloettner and his son Stefan have installed a 40-point DairyProQ for their herd of 400 Holsteins, replacing a five-aside auto tandem parlour.

Since the installation last June, milk yield has improved by seven litres a cow a day and somatic cell counts (SCCs) have fallen from 260,000/ml to 90,000/ml, said the Bloettners.

Cows are milked three times a day through the parlour, with 200 cows milked every hour – 40 cows can be milked in one 12-minute revolution.

“We started with a herd average of 28 litres a cow; we now milk 35 litres a cow and high yielders have a daily milk yield of 42 litres a cow,” explained Eckehard.

The parlour is run six hours a day and manned by one member of staff.

The stalls can be switched to manual to allow staff to milk any problem cows with bad udder attachment by hand too.

Eckehard said one of the biggest benefits is it enables cows to be milked well consistently.

“For 400-head herds this is probably the future if they want to milk three times a day but don’t want to milk 24 hours a day,” said Stefan.

The parlour records days in milk, mastitis levels and lactation length, as well as other data. Information can be transferred to a computer or smartphone.

Oliver Moore from GEA said the release of the DairyProQ was a “game changer” when it came to servicing because it near enough eliminates downtime.

If one of the robots breaks down the entire module can be removed with a winch and repaired during normal working hours instead of having to have someone on call 24/7, he explained.

“There is a small room on the right [of the parlour].

“You can remove the whole robot and repair it there and you can still milk with 39 robots.

“If the whole thing crashes you can still milk every single cow manually,” explained Stefan.

“Per stall it works out significantly less than a robot costing £100,000,” said Mr Moore.

Meanwhile milking parts are contained within a tray and can be serviced and replaced easily.

The rotary comes in a range of sizes from 28 stalls up to 80. The price is still to be announced.

GEA has also released a Monobox robot for smaller farms with up to 70 cows. It uses the same equipment as the DairyProQ rotary and all milking processes are carried out automatically.

It will be available in the UK next year. The price is not yet avaliable.