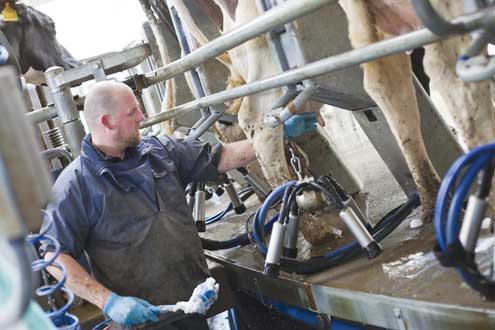 More and more producers are investing in rotary parlours to cut milking times and get their dairies running more efficiently.

But the move from a herringbone system can be a big change – not just for cows, but also for staff – and careful management of parlour employees is vital if you are to get the best from your investment.

“Going from a herringbone to a rotary and not understanding the labour implications is the biggest stumbling block I come across,” says Ian Ohnstad of the Dairy Group.

“Rotary parlours are an incredibly efficient way of getting cows milked quickly and getting staff out doing other jobs, but they need to be staffed properly.”

Having invested significant sums in machinery, Mr Ohnstad says many producers may be reluctant to see labour wages in the parlour increase.

On a typical 44-point external rotary, at least three staff members are needed during milking to get the systems working as efficiently as possible, he says.

“Ideally you need to have a person doing teat preparation and mastitis protection, someone putting the cluster on the cow and another removing the cluster at the end of milking.

“There are examples of parlours operating with less than three people if they have dynamic systems with automatic cup removers and back-flush systems, but I think they are likely to be making compromises and feel happier with three people positioned around the rotary (see below).”

Giving staff time to get used to a different system is also important when moving to a rotary parlour, Mr Ohnstad says.

“Just as the cows have to get used to moving in single file and stepping on to a moving platform, there’s a degree of adaptation for the operator too.

“You see people trying to milk too quickly and if they turn up the rotation too quickly then cows don’t latch on and you have to put the rotary in reverse to go back and correct things.

“Finding an appropriate rotation speed for staff to be able to do their jobs is vital.” 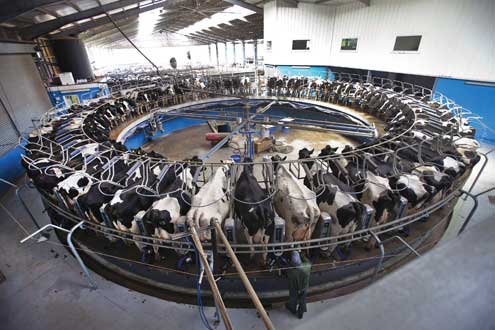 Izak Van Heerden, an extension officer at DairyCo, agrees timing of the rotary and understanding the speed at which staff work is key to getting the system running efficiently.

“Calculating how long it takes for a parlour to rotate and deciding where staff should be positioned will differ for each system,” he says.

“The common mistake people make is to try to get the clusters on as quickly as possible, because they think it will make milking faster,” he says.

“But if you put the clusters on before the milk reflex kicks in you will have dry milking, which can cause teat damage.

“You should wait 60-90 seconds after preparing the teat so the milk is stimulated. Taking time with the cows will actually make milking quicker and more effective.”

To decide precisely where staff should be positioned, time how long it takes to prepare teats and calculate where the milk reflex position will kick in along the rotation.

“If you have one person milking, time how many cows they can strip and dip in 60 seconds. If they can do five cows, time it so they can go back and put the clusters on those cows,” says Mr Van Heerden.

“If you have more staff, look at how each member works to come up with an average speed to make use of the milk lag time to get the clusters on.

“I have milked in internal and external rotaries and getting the timings and the rhythm right is important, but once you have that right it can be a great system,” he adds.