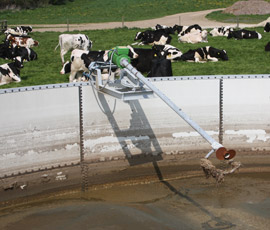 Farmers are being warned of the dangers of stored slurry after four cattle died from toxic gas produced by a slurry store.

During a recent dry spell, a Scottish beef producer in the Scottish Borders took advantage of the conditions to begin emptying some of the slurry stored under the slatted floors of his beef sheds.

After taking out just two or three loads, he returned to find four large steers dead. An investigation found they had been suffocated by hydrogen sulphide gas.

The unusual events that led to the fatalities have prompted the Scottish Agricultural College (SAC) to issue a warning to farmers.

A spokesman for the SAC said: “It is well known that mixing and handling slurry can produce this toxic gas, which is invisible, although it smells like rotten eggs. In a confined area it rapidly kills both cattle and humans by suffocation.

“It is also understood that adding silage effluent to slurry increases the risk as the nutrients in the effluent feed the bacteria in the slurry which are responsible for producing the hydrogen sulphide gas.

“What was unique in this recent borders’ case was that the farm had just started using waste plasterboard containing high levels of gypsum to help dry up the straw bedding being used in other buildings.

“However heavy rain had washed some of that gypsum into the slatted shed and down into the slurry store.”

Gypsum, or calcium sulphate, contains high levels of sulphur, which encourages the bugs to produce even greater amounts of hydrogen sulphide from the slurry.

As a result of this freak incident, the SAC is warning producers who are using waste plasterboard or other gypsum sources to take precautions.

“As an additional safeguard, farmers should ensure that the product is stored and used in a way which completely avoids any potential contamination of slurry supplies,” added the spokesman.

While this use of gypsum sources is relatively uncommon in Scotland, it is believed to be more widely used in England where there is more available.

The SAC has reminded farmers that when emptying slurry stores there are several key safety points to consider:

• Before starting take all animals out of the building and open all ventilation, doors etc

• Ensure another person is always present who stays outside the shed and can summon help if needed, but without entering the building and endangering themselves