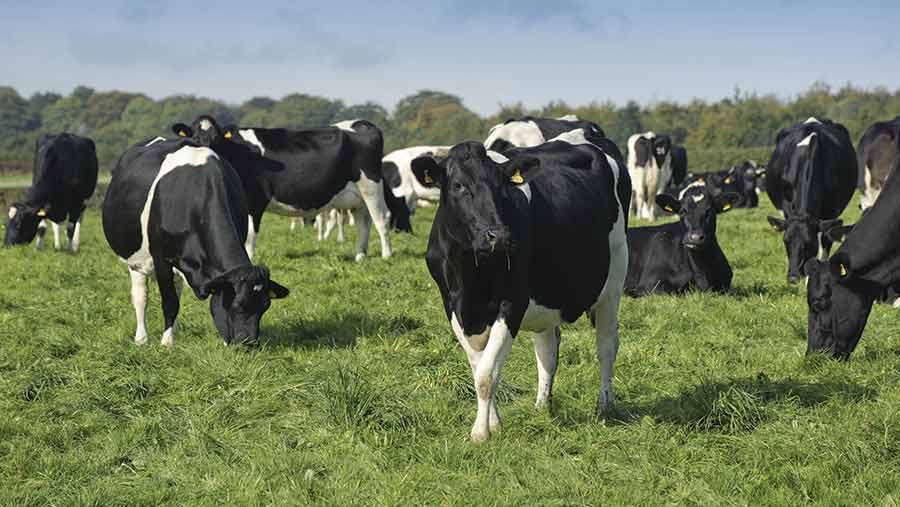 Introducing British Friesian genetics has saved a Norfolk dairy herd from the brink of closure, seeing milk from forage rise 520% and concentrate usage drop by 40%.

The Walker family has sacrificed milk yield for control over costs, steadily changing their 160-cow Holstein herd at Attleborough Hall Farm for more robust British Friesian genetics, allowing more to be made from grazing and home-grown forage.

Prior to the move they were running all-year-round indoor calving Holsteins, averaging about 11,000 litres. But this system “made a lot of milk but not a lot of money”, says eldest son Ben Walker, who farms in partnership with parents Ian and Sue and younger brother Tim.

Crunch time came after Ben returned from university and the family attended an AHDB Planning for Profit seminar in 2011. The decision was made to switch to block autumn calving and graze paddocks on rotation.

“We have proved we can make money autumn calving,” he explains. “The year ending March 2015 was the most profitable year we have had in dairying, but the current year has proved testing.”

Autumn calving was chosen to suit the farm forage growing season and lack of rainfall. As well as the dairy, which has a grazing platform of 48ha and grows 28ha of maize,  the Walkers also grow wheat, oilseed rape, winter barley, spring barley and sugar beet across 270ha, as well as contracting and machinery sharing a further 170ha.

“We went for the autumn block calving owing to dry conditions meaning poor grass growth during the summer, when spring-calved cows would be hitting peak yields,” explains Mr Walker, who expects around 600mm of rainfall a year.

“With the autumn calving system I am drying cows off as grass growth falls, thus feed demand falls to match. This also fits in well with arable enterprise as arable staff are available to help with winter feeding routine and jobs like mucking out.”

Despite the present milk market, the Walkers are managing to “just about break even” with a September milk price of 23.13ppl and October dropping to 22.52ppl. Last year saw Mr Walker achieve a 12-week calving period for the first time – from 1 September to 1 November – with cows then housed in straw yards until February and grazed for the rest of the year.

And while the move to Friesian dropped milk yields to an average of 9,000 litres, the herd’s vet and med bills halved from £24,000/year to less than £12,000/year, largely thanks to improved mastitis and fertility rates.

Mastitis cases are now at around 25 cases for every 100 cows a year and fertility rates have increased from 25% to 45%. Milk yield has lifted to about 9,400 litres and somatic cell count is averaging 129,000.

Components have been a long-term issue at Attleborough Hall Farm, with butterfat levels needing to hit 3.7% and protein above 3% on the Arla contract, with bonuses above 4% and 3.3% respectively. The rolling yearly butterfat average is 3.87% and protein runs at around 3.23%.

“In the past we have really struggled to even meet 3.7%, but now it’s just at peak milk we have to supplement, then during summer months at grass we’re hitting 4% without supplementing,” says Mr Walker. “Protein averages 3.23%, whereas back in 2011 it was 3.07%, but the change of system and the Friesian bloodlines have improved that.”

Impressed by results at other dairies, Mr Walker now hopes to cross everything with Jersey genetics through AI. This will hopefully increase milk from forage and take components even higher, he adds.

Cows are now given access to a 48ha grazing platform by 1.1km of sleeper tracks and 2.2km of water pipes. The pasture is divided into 1.5ha paddocks separated by electric fencing, with cows buffer-fed at grass.

A wetter summer this year made grass management more challenging for the Walkers in terms of matching supply with demand. “The biggest change for me is measuring grass and grass budgeting,” Mr Walker explains. “We turn out in mid-February and have managed to do this for the past three years.

“We will probably look to extend grazing further into the autumn, keeping them outside in the day and housing them at night after calving.”