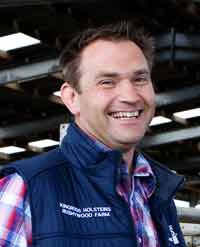 You get the impression that Neil Baker wakes up every morning with a fresh performance target to set, to achieve and then to beat. Key Performance Indicators (KPIs) festoon the walls of the office, alongside large charts that display how successfully they’re being accomplished.

It’s a tireless drive for perfection that’s evident throughout the 1000-cow dairy unit at Crewkerne in Somerset. “The day you pass a bed and don’t kick the muck off is the day you give up, in my view,” he says. “If I don’t set high standards, how can I expect farm staff to keep them?”

His cows, his parlour and yards are in staggeringly good condition. There are KPIs to match, with health performance the key focus. Mastitis is down to 11 cows per 100 a year, but the target now is zero. Lameness is down to 6.9%, but the aim is to eliminate it. Conception rate is at 37%, up from 25%.

There are rigorous routines carried out throughout the unit that underpin these targets – from the four-stage process to present a clean udder in the parlour to the daily temperature monitoring of the fresh cow group.

The unit has grown rapidly, doubling in size in just five years, but maintained its exemplary health procedures. Successfully devolving day-to-day management to his staff has been a key recent achievement for Neil. For their part, the staff clearly take pride in and can see the value of the high standards they maintain.

As well as milk production, the farm produces 270t a year of vintage Cheddar. Handmade traditionally (the head cheesemaker has been with them for 30 years) this is sold to Tesco, Waitrose and Marks & Spencer. The drive is on to ensure consumers recognise not just the superior taste of the cheese, but its provenance, too.

Neil remains in charge of nutrition and applies the same attention to detail that he expects from the rest of the unit. The cows are TMR fed all year round, with only a small amount of concentrates fed in the milking parlour.

The silage from the fertile loamy clay soils has meticulous targets, too – field offtake is measured closely against inputs of fertiliser as well as dirty water and manure. The aim is to minimise the amount of fertiliser and bought-in feeds by optimising what’s spread on the fields.

So what one yardstick does he believe shows his system is working? “Cow comfort – get that right and you’re heading in the right direction,” he says.

Neil has grown a large scale unit through setting targets. He has created a unit incorporating outstanding health and welfare standards

The three finalists have followed different routes to expanding their business, achieving impressive results. Yet all three have focused on animal welfare. This is a great example to set for the entire industry.

Close contact with his customers, a flair for innovation and impressive on-farm standards for animal health and welfare have earned Angus an enviable command over the goats’ milk market

A hard-working and honest approach to running a family farm and a superbly managed dairy herd, achieving impressive financial results, are what sets Stephen and Linda apart