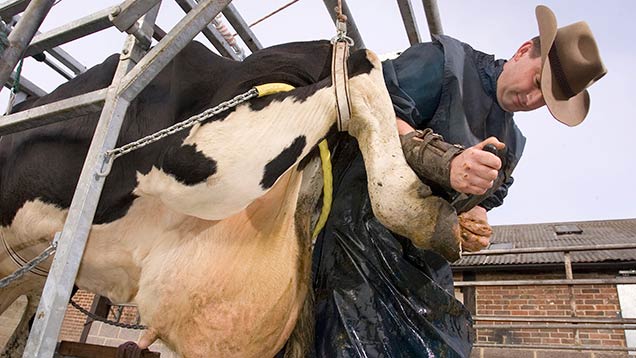 Controlling negative energy balance in early lactation is one of the best ways to prevent lameness caused by sole ulcers, haemorrhages and white line disease, according to new research.

Speaking at the inaugural Total Dairy Expo event in Carlisle last week, Prof Huxley told farmers to forget the historical view about rumen acidosis leading to lameness and instead focus on body condition. He also stressed the importance of detecting and treating lameness early for effective control.

He said when cows lose body condition they begin mobilising fat from all areas of the body, including the fat pad that exists in the feet of cows.

“Cows have three cylinders of fat lying under the hoof, which acts like gel cushioning in trainers – a shock absorber. Our research has shown cows with thinner fat cushions are more likely to have sole lesions,” he said.

Prof Huxley stressed the importance of detecting lame cows early, saying farmers should view it like they view mastitis control.

Prof Huxley said when lameness is detected as a score 2.0 or above, cows are more likely to recover compared to when they are left.

In a study where cows were treated at score 2.0 lameness with a foot trim, block and anti-inflammatory drugs they were two times more likely to have recovered after five weeks. However, when the same treatments were given to score 3.0 lame cows, the vast majority remained lame after treatment, he explained.

Prof Huxley said: “This screams out that treating early is the most effective way of controlling lameness.

“Treating lameness should be exactly the same as treating mastitis. You need to think of score 2.0 cows and treat them the same as you would your repeated high cell count and clinical mastitis cows.”

It has also been shown environmental factors such as housing type and calving have effects on the structure and function of the hoof.

Prof Huxley explained how around the point of calving, hormones are released that soften the connective tissues, including the attachments of the wedge-shape hoof bone and the hoof capsule.

“This explains why dairy cows are more likely to become lame one to two months after calving. That’s why it’s important to get the balance of the environment, body condition and care, particularly around calving, right.”