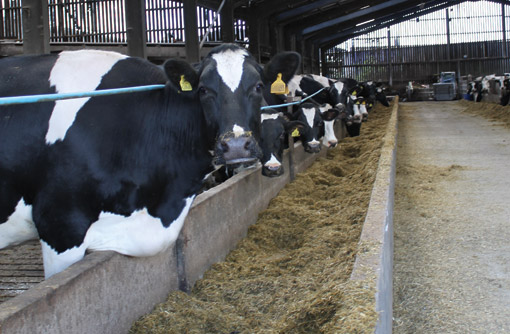 Maximising milk from forage can slash costs of production – but the first step is to make the best silage possible, as Olivia Cooper discovers

Many dairy herds are living on borrowed time when it comes to forage stocks, with last year’s appalling weather having significant knock-on effects. Fortunately, this year’s maize crop is looking superb, offering producers an excellent opportunity to fill their silage clamps with generous amounts of high-quality feed.

But with new varieties and the warm autumn, farmers have to make sure they get the harvesting and ensiling process right – or they could end up with high levels of wastage.

Neil Parkhouse, who milks more than 500 Holsteins at Treveor Farm in Cornwall, has been focusing on boosting milk from forage and improving fertility for the past few years. “Feeding is the key to fertility – they are inextricably linked,” he says.

With the cows housed year round, and milked three times a day, Mr Parkhouse has already used up most of last year’s forage, and had to cull hard over the summer to eke out the remainder. “We cut some winter barley wholecrop cereals early so we had something extra to feed.”

Typically, he feeds the high-yielding group a mix of 18.5kg of maize silage, 13kg of grass silage, and 7.5kg of wholecrop cereals, along with soya, distillers’ grains, minerals, molasses and other additives. He tests the forage every two to three weeks and balances the ration accordingly, targeting a dry matter intake of 25.5kg/day in the high-yielding group, with 12.6MJ of metabolisable energy, and 17.8% protein. “We also feed an 18% protein high-energy cake, to yield, out of the parlour,” he says.

With maize harvest looming, Mr Parkhouse is optimistic about this year’s crop. He has used a stay-green variety of maize which doesn’t die off, so at harvest it’s still quite lush.

“You just have to judge the maturity of the cob, with the whole plant between 30-34% dry matter at harvest,” he says. “The silage looks quite green in the clamp, but you don’t get any effluent and the cows love it – the instant we change to a more traditional variety, there is a degree of dead material rejected.”

After having a problem with eyespot during a wet summer, Mr Parkhouse decided to use a food-grade preservative in place of a traditional inoculant. “It kills off any bad bugs, so the forage is better for rumen health; and it doesn’t heat up so you get a lot less waste,” he says.

During harvest, he runs an additional tractor alongside the buck rake to ensure the clamp is well consolidated and to maximise clamp capacity. He then uses 2 in 1 barrier sheets on both the top and sides to keep out the elements. “It’s a bit more expensive than cling film and conventional sheets, but the extra cost is easily saved in labour,” he says. The clamp is then weighed down with clamp tiles and sandbags.

This year, Mr Parkhouse will have to feed his maize silage almost immediately, but it is preferable to leave it for at least two months to ferment, says Alan Moore, from Agricultural Central Trading. “Starch degradability improves from about 68% after one month, to 75% after three months and around 78% after six months – and the more digestible the starch, the more milk you will get.”

As the farm is quite spread out, Mr Parkhouse has silage clamps some distance from the dairy unit, and has to transport forage back for feeding. “We apply more preservative to the summer feeding clamps and those that need to be transported, as maize can be unstable, and if it heats up it will lose nutrients and become less palatable,” he says. “We want to keep the silage cool in the clamp and cool in the feeders.”

By maximising forage quality, and eliminating waste in the clamp and the feeders, Mr Parkhouse has improved his margin by £100 a cow over the past year. “We’re now getting 3,000 litres from forage and want to target 4,000 litres,” he says. “But in recent years our calving index has dropped from 435 days to 382, and we’re getting a lot fewer displaced abomasums and acidosis cases by getting our feeding right. We’re feeding the rumen, not the cow, and the cows are a lot healthier as a result.”

Keep up to date with the latest maize harvest news