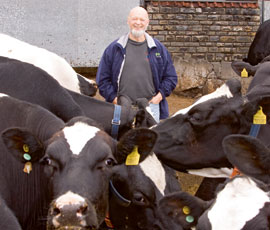 Michael Eavis offered a glimpse into what it’s like juggling life as a dairy farmer and host of the world’s biggest music festival this week.

Talking to a paying audience on London’s Southbank on Tuesday, the Somerset farmer (and Farmers Weekly subscriber) described how the festival has to be meticulously planned around his dairy herd.

Four weeks before 140,000 festival-goers descend on the 364ha (900-acre) site, his cows are brought into their winter housing – dubbed the “Mootel” – for the duration of the festival. Moving them early, Mr Eavis explained, is a necessary precaution to minimise the risk of E coli.

He also employs 14ft metal detectors to scour the site after the festival has closed its gates, to ensure the cows don’t ingest coins and other metal waste when they’re returned to the fields to graze until the end of October.

Asked by one audience member if he takes inspiration from other festivals, he said: “No. I don’t go to other festivals, because I’ve got a day job on the farm you see.” He also insists on a fallow year every few years, allowing the fields to be rotated and the grass to grow.

Arguably the biggest farm diversification project in the world, the festival has retained close ties to the working farm throughout its lifetime.

In 1970 (its founding year) a ticket to the festival cost just £1, which included free milk from the farm. A decade later a permanent stage was built on the site, which doubled as a cowshed and animal food store during the winter months. And today, Mr Eavis speaks with just as much pride about running the festival, as he does about having the “highest-yielding herd in Somerset”.

Indeed, when he’s not liaising with music agents in LA to book headline acts, you can still find him in the milking parlour. “I’ve been milking for 40 years,” he said, “I find it relaxing. In the ’80s I used to go up to London to catch a Grateful Dead gig, and get an early train to make it back in time for milking.”

2011 marks the 41st anniversary of Glastonbury, but Mr Eavis said there are no plans for retiring – either from the farm, or the festival.

“I’m still excited by it, it’s so stimulating – I even like the rain. There’s ways of coping with the wet fields. All these people come to the farm from all over the world – why would I want to give it up? No I don’t feel tired of it at all.”