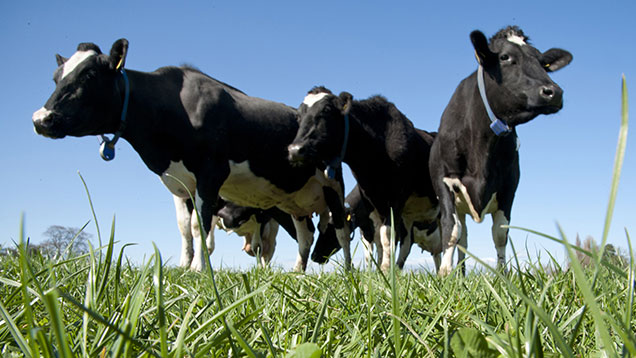 Mr Thornhill, Love Lane Farm, Sandbach, is now measuring grass and when he turned cows out in February his best fields had 2,200mm of growth on them.

Lowering costs of production to try and improve the profitability of milk is the key driver to the farm putting greater emphasis on improved grass use.

“I’m very excited about what we’re doing and about where I hope we’ll be in five years’ time. I don’t want to push the farm or the cows, but I want to make a really good job of what we do.

“There’s no cheaper feed than getting cows to graze grass. And when we took a sample of the grass we turned out on to in February it was providing us with a 27% protein forage.”

The 100-cow herd is gearing up for expansion with plans to eventually milk more than 200 cows.

Mr Thornhill’s cows were outside for about three hours a day in February – weather permitting – and eating about 5kg of grass dry matter during that time.

“We’d never normally have dreamed about having cows out at grass in February; turnout for us would usually be April, depending on the weather, but we’ve been working towards this for a while.

“We used to take sheep on tack to eat up any left-over grass at the back-end and then get everything grazed off to 1,300mm. But what a waste of grass that was if you’re a dairy farmer.”

Cows were housed in November last year, but some fields were left so there would be something to graze in February.

“The cows were turned out on to a range of leys – some old some new. We’re gradually reseeding with high-sugar varieties to give us five to seven-year leys.”

“The covers we turned out on to in February were at about 2,000-2,200mm with the aim of having 30% of my grazing platform grazed by the end of February. And it encourages regrowth once it has been grazed off. I’d like to be grazing them again by the end of March,” he says.

The target is to take grass down to 1,500mm after being grazed. Each cow will take about 5kg of dry matter a day after three hours.

“Recovery time will depend on the weather, but it’s important to get down to 1,500mm in the first round.

“We’ll probably apply 20 units of nitrogen as soon as I think the grass will get some benefit from it.”

As soon as the grass wedge starts slowing down in the autumn an assessment will be made about what’s going to be needed for the following spring.

“Perhaps we can save what we need and graze off the rest; make best use of some of that late-season grass it could be used for heifers or dry cows if ground conditions allow so that we can get the paddocks really well grazed down.”

Mr Thornhill says he’s had to invest in the farm’s infrastructure by putting in half a mile of tracks and the paddocks.

“But we’ve been putting it all together over five years. I still need to put down another 1,000 concrete sleepers costing nearly £6 a sleeper, but that will open up another block of land.”

A ring fence has been erected around all the farm’s main fields and then the 2ha paddocks have been created using electric wire on to fencing posts.

The herd has an average yield of 6,000 litres. “I’m not intending to push the cows any harder; I just want to produce milk as efficiently as possible from forage and have a herd of good strong cows that will last.”

Cows are fed a basic forage mix of grass silage and maize silage and are topped up in the parlour up to a maximum of 6kg. This may be cut back later in the spring.

The herd is now moving towards both a spring block and an autumn calving block with the aim being to milk 130-140 in each block. A new parlour will give capacity to milk 260 cows and there are enough grass acres to cope with that expansion.

“We are thinking about using some New Zealand genetics because our cows are more of the Holstein type, but we’re also using Fleckvieh semen to see how the first-cross heifers turn out.”

The one-day triennial Grassland UK show taking place on 7 May next to the Bath and West Showground, Shepton Mallet, looks to cover every aspect of the farmer’s interests, from seeds to feeds, machinery demonstrations, muck demonstrations, seminars, clamp demonstrations, slurry demonstrations and trade stands from all sectors of the industry. To find out more go to www.bathandwest.com