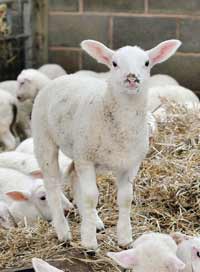 A rapidly growing market for sheep’s milk products could mean there are opportunities for more producers to begin sheep milking enterprises, but its not as easy as it looks

Milking sheep is more like dairy farming than sheep farming, say Lancashire farmers John Stott and his son Simon. “But turn dairy sheep out in a field and most of them think grass is for lying on rather than for eating,” jokes John.

Despite the sheeps’ preference for eating from a trough, rather than filling up on freshly grazed grass, the 400 Friesland milking ewes at Laund Farm, Chipping, Preston, are still turned out to grass during the summer on this hill farm on the edge of the Trough of Bowland.

The milking flock was a big crowd puller at this year’s North Sheep event, which was hosted by the Stott family in June. But while their high standard of livestock husbandry skills might have made sheep dairying look relatively straightforward to visitors, they are adamant that anyone considering such a venture must be ready to maintain top-notch management for both the day-to-day running of the milkers and for the flock’s female replacements.

“You can’t just leave the ewe lambs to rear themselves and then expect them to lamb, come into the parlour at 15-months-old and start pumping out milk. We’ve learnt from experience that you’ve got to be on top of the next generation of milkers from the day they are born, in terms of nutrition and management.

“They mustn’t have any check in growth and development or milks yields will suffer once they start to come into the main milking flock,” says Simon.

Ewe lambs are taken from their dams at two-days-old and reared on a milk machine. While ewe lamb are intended as replacements or for sale, the rest are sold finished at 12-14 weeks old.

John and Christine Stott – along with their son Simon and his wife Rachel – run Milk Sheep UK which is a non-profit making farmers’ co-operative set up in 2003 to market sheep’s milk. It handles about 500,000 litres of milk a year – collected by the co-op’s own tanker – but setting it up has added another layer of management to the farm business.

“It’s not just about producing milk from sheep, it’s also about selling the milk – and that has meant we’ve had to get into finding a market for it. 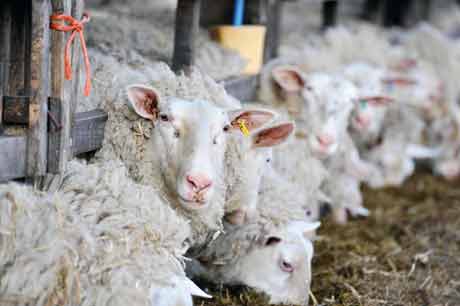 “We’re still sheep farmers at heart, but milking sheep couldn’t be more different from earning a conventional living from a flock of ewes,” says John who has just taken over as president of the Bluefaced Leicester Sheep Breeders Association.

The family has long been associated with Bluefaced Leicester sheep and producing North of England Mule lambs from its Swaledale flock – a side of the business that continues to be based on 500 Swaledale ewes run alongside 100 Beulahs and 50 pedigree Bluefaced Leicesters.

The sheep milking venture was started in 2000 and produces most of its milk from January to September. No milk is produced in December and ewes are sheared just before lambing in January and again in May. The highest yielding ewes produce up to 1000 litres a lactation.

As well as developing a management protocol for the dairy flock and instigating the milk marketing system, the Stotts have had to ensure they have a breeding policy in place to ensure flock replacements maintain sufficient genetic improvement to keep the flock both productive and profitable.

There are always pedigree Friesland rams and females available for sale at Laund Farm, but John admits the limited number of Friesland breeders in the UK – and the inability to import rams – has presented a real challenge. The family is using tups from high-yielding dams with particular care paid to selecting replacements from ewes that have not only proved their worth in the parlour, but have retained good udders and sound feet. Replacements are only considered from dams that have given at least two litres of milk or more a day. The lower yielding milkers are crossed with Texel and Beltex rams with all their progeny sold as prime lambs.

“Foot care is a really big issue with dairy sheep. We use an expensive footbath solution once a month to try and keep on top of any foot problems and pare as often as we need to, which can be often.

“Managing a flock of dairy sheep is a challenge, but we’ve worked hard at it. We’re now seeing the results coming through based on breeding and feeding,” says Simon. The flock averages 550 litres a ewe at 6.38% fat and almost 6% protein. Milking through the 24:24 parlour – which does not yoke the sheep – takes two and a half hours twice a day.

But production is markedly influenced by feed intakes and the Stotts say they have a “sizeable” feed bill every month. “Least reliance on grazed grass is the way to produce the most milk from dairy sheep, which means production costs are high. We feed a flat-rate diet of 1kg a head a day of a 19% protein ration split into two feeds in the parlour.”

But the flock’s major feed intake comes from a TMR mix – about 5.5kg a head a day – comprising grass silage, whole-crop, brewers grains and a bought-in high-energy meal fed with molasses. This produces a 17.8% protein and 11.8ME.

“You’ve got to treat sheep as well, if not better, than high yielding dairy cows in terms of diet and management. You soon learn with sheep that if you allow the yield to dip at any stage of the lactation, you never get the sheep back to a higher level of production,” says Simon.

Sheep Milk UK producers are currently receiving 90p a litre with milk collected every three days. Sheep’s milk doesn’t deteriorate if kept at less than one degree celsius, but unlike goats’ milk it cannot be deep frozen.