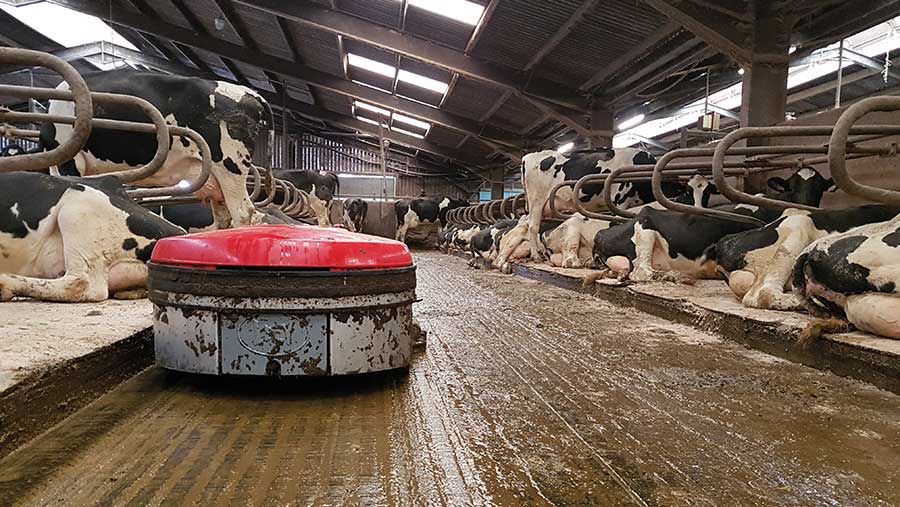 The installation of four automatic slurry vacuums has helped a Scottish dairy farmer reduce his mastitis cases by 50%, as well as benefiting cow health and saving on labour.

Prior to this, he was using rope and hydraulic scrapers, programmed to scrape passages 12 times a day.

See also: How one dairy farm installed robots to cut down milking time

“We were getting a bit fed up with our previous system causing some issues with damage to the cows’ feet,” he says. “We wanted to get away from a system where there were any obstructions to mitigate this.

“I’ve also never been a fan of the way traditional scrapers can cause a ‘tidal wave’ of slurry coming down through the sheds, largely because of the issues this causes with both mastitis and foot health.”

There are a lot of common problems with scrapers, as well as sometimes quite lengthy maintenance, so we were interested to see if there was a robotic solution that could alleviate these issues.

“Secondly, to address the mastitis and foot health concerns, I really liked the fact that the Lely Collector vacuumed up the slurry rather than pushing it down the sheds.

“[This meant] cows would be less likely to spend time standing in any significant volumes of slurry – reducing the risk of health and hygiene issues within the herd.”

“It was very straightforward and didn’t really require much input from me,” he explains. “They have gone really well, in fact, we haven’t had any teething problems at all.

“The only thing to be mindful of is that they do require regular maintenance such as cleaning the sensors and filters.

“However, this is easy enough to do – it takes me about 10-15 minutes a week. If you ensure you do this weekly, you will have no issues.” 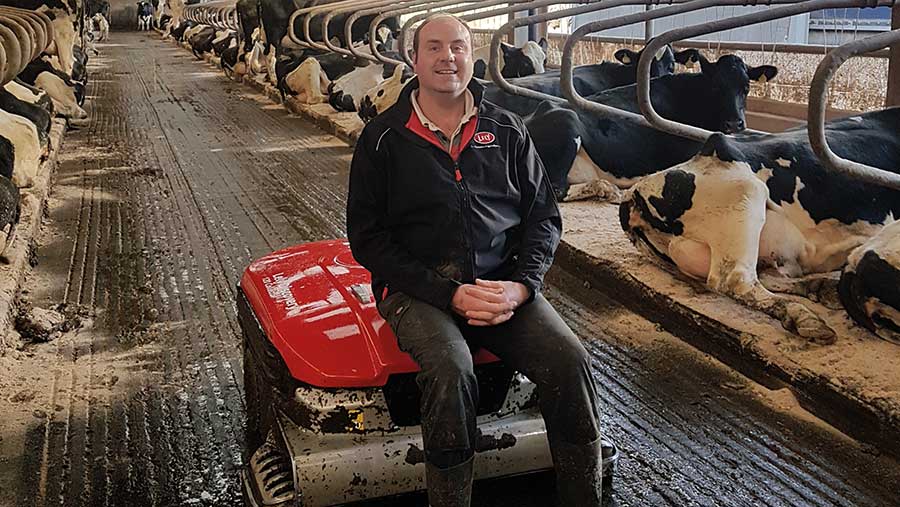 Collector slurry vacuums work by spraying water from the front and back of the machine before using suction to vacuum slurry from the shed floor. This ensures a deeper clean than traditional scraping methods.

They do not require cables or gutters, so there are fewer obstructions for cattle, explains Mr Nicholson.

“Three out of the four robots are programmed to independently navigate their route using built-in sensors to scrape a passageway 18 times a day,” he says.

“They are also routed so cows are never disturbed at the feed fence.”

The fourth robot is programmed to scrape the dry cow and in-calf heifer shed 16 times a day, as well as the collecting yard after each milking.

“This has been really beneficial from a labour-saving perspective as it saves around 20 minutes a day, as well as the hassle of manual scraping at the end of milking,” he adds.

“Day to day, they do not cost much to run and have a very minimal power requirement,” he explains. “We estimate this to be less than 45p/robot a day.”

Mr Nicholson has met his objective of boosting cow health, with gains in a number of areas.

“Prior to the slurry vacuums, we were struggling to keep our count under the maximum threshold for the premium payment within our milk contract, but they have dramatically improved it.”

Rates of mastitis have halved, to five cases a month. Furthermore, 80% of the herd is now dried off using only teat sealant. This compares with 50% previously, he adds.

“Our milk contract is with Arla and since we installed the robots, 95% of the herd has an Arla cleanliness score of 0 – compared with 90% on the old system.

“Another really important outcome of the robots is that our cases of severe lameness – cows that experience really damaged hooves – have now reduced too, by around 50%.”

Secondary benefits of improved hygiene include a 50% reduction in milking preparation time, down to just 20 minutes a day, and a 10% reduction in the amount of sawdust used – as well as noticeable labour savings.

“So far, we are really impressed with the slurry vacuums. They have addressed our foot health and cow comfort concerns and we are seeing great results reflected in both our milk hygiene scores and a number of elements of cow health,.” says Mr Nicholson.

Advice for investing in a slurry robot