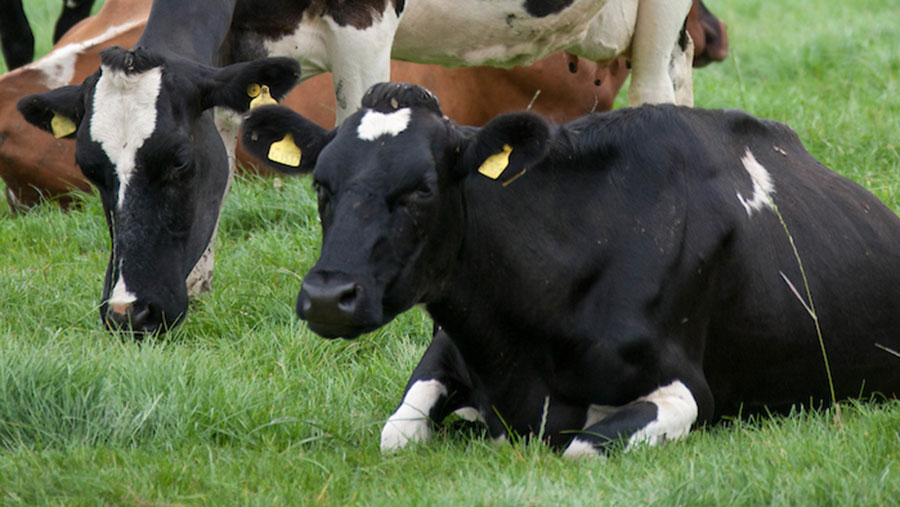 When Liam and Catherine Millerick read that once-a-day milking could be as profitable as twice a day, inspired by the lifestyle benefits, it didn’t take them long to start researching the shift.

On their 200-acre (81-ha) farm near Fethard in County Tipperary they have now completed their fifth full season of milking 120 Jersey crossbred cows once a day (OAD) and the results speak for themselves.

“The challenges of once a day are no different to twice a day,” Liam told delegates at the Positive Farmers conference in Cork, Ireland on Thursday 17 January.

“But more attention to detail is need with once a day, in our opinion.”

In 2010, the husband and wife team were milking 60 black and white cows twice a day and knew they had to do two things if they wanted to increase herd numbers but reduce milkings – change their breeding and invest in facilities.

“Research told us Jersey crossbred cows would be the best for once a day, but we had a black and white herd at the time,” said Liam.

The Millerick’s herd was a mix of Holstein, British Friesian and New Zealand Friesian, so they used pure Jersey bulls across the whole herd and the first crop of crossbred calves hit the ground in spring 2011.

They started milking once daily in the spring of 2014 with 96 cows; more than 40% of them first lactation heifers. A strong milk price made the transition easier, but it was a learning curve with between 10 and 15% of the herd culled in the first year due to unsuitability for the system or high SCC.

All cows are AI’d over a 10-week period and fertility is high, with the six-week calved rate more than 90% consistently for the past five years.

“We tend to reverse the milk: fertility weighting in EBI, so we put more emphasis on milk than fertility.”

Investment in shed and milking space as well as technology has been required at the unit to make the switch and has been allowed through healthy profits. The sloped floor shed was converted to cubicles for heifers and a new heifer calf shed was built in 2011.

In 2013, the parlour was doubled in size to allow capacity for milking 16 cows at a time and subsequently meal feeders and a liquid mineral system was installed.

The development has continued with new shed space, a slatted tank and investment in machinery and lime spreading.

Production has increased each year since 2014:

Last year was the first year out of 35 that the farm had to buy in silage. The increased costs did mean net profit a cow was back approximately 20%, but it was still in excess of €800 a cow.

She added: “We’re never going to be as good as a twice-a-day milker in a high milk price, but when the milk price is on the floor that’s when we’re going to make more money than twice a day.”

Emphasis is placed on pasture, with grass growth measured every 10 days or five at peak and cows out from early February to early December.

All machinery work is done in-house apart from baling and wrapping, which is done by a contractor. And without the workload of twice-a-day milking machinery is well looked after. “We look after stuff,” said Catherine. Anything not used in 12 to 20 months is sold to avoid having scrap around the place.

Catherine says their biggest priority is a healthy herd as “a healthy, happy herd will make profit”, so they vaccinate for everything they can.

One of the main health challenges they face is milk fever in over-conditioned cows, seen in 8% in spring 2018. Cows are body condition scored at drying off, grouped and fed accordingly and reassessed in late December to try and help manage the issue.

6.30am – Out of the house. Liam goes to herd the cows and fix up wires/paddocks.

7.00am – Cups on. Catherine starts milking. Liam returns to the parlour and one goes to see the in-calf heifers and calves while the other milks.

When milking is finished, one washes down while the other scrapes the yard and locks the cows in.

9.00-9.30am – Back the house for breakfast and the key bit of the working day is done, allowing time for other jobs on the farm, discussion groups and meetings or time off.