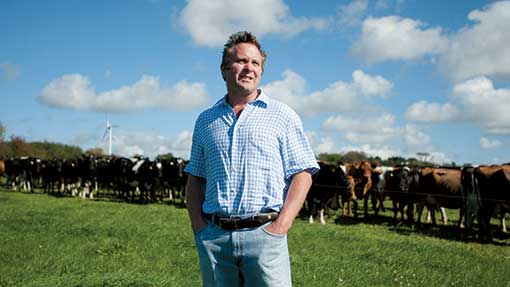 Once-a-day milking can be an attractive option for dairy farmers looking to reduce time spent in the parlour, but the benefits don’t stop there. Aly Balsom reports

While less time tied to the parlour may be one of the headline benefits of once-a-day milking, it’s clear most farmers taking the plunge also have the bottom line clearly in their sights.

For Cornish dairy farmer Andrew Brewer, increased profit a hectare was one of the main reasons he decided to reduce milking frequency on his grass-based, spring calving system.

“We looked at several different budget options and crunched the numbers and once-a-day won financially over twice-a-day milking. Butterfats and protein are higher on once-a-day and cows eat less – it’s simple maths,” explains Mr Brewer, who supplies milk on a constituents contract to Davidstow.

Over the years, the Jersey cross Friesian herd at Ennis Barton, Newquay, has undergone significant expansion, growing from 60 cows in 1998 to the current herd of 650. As numbers have increased, so have walking times from pasture to parlour. As a result, the farm started using occasional once-a-day milking to free up staff time at the weekend. It was also used strategically at the end of the season as cow yields decreased.

“In 2005 when we had 500 cows, we were probably milking 13 times a week, mostly to improve lifestyle. We found the reduction in yield was less financially, than paying a relief milker,” he explains.

As cow numbers grew further and walking times increased up to two hours, the proportion of the season when cows were milked once a day was extended. In 2009, cows were milked daily from June until drying off in November. The decision was then made to milk once in the morning throughout the season, based on careful cost calculations.

As a result of these improvements in efficiency, profit a hectare has increased by roughly 20%.

“Profit a hectare is a big driver and this has increased since going once-a-day. Yield a hectare is also something we look at. We want to maximise the amount of forage we utilise into milk as we need a sustainable business. We’re doing about 13,000 litres/ha with cows stocked at four cows a hectare on grazed grass,” says Mr Brewer.

Better control over grassland management has also been fundamental in helping to improve profits through better grass utilisation.

Cows are currently only housed for a short period at calving and graze grass for much of the year before being outwintered on 29ha of fodder beet.

However, buildings are being put up to provide winter housing at strategic times. This will help maintain production and protect soils when ground conditions are poor. The aim is to keep costs below 60% of the gross farm income, excluding finance and rent.