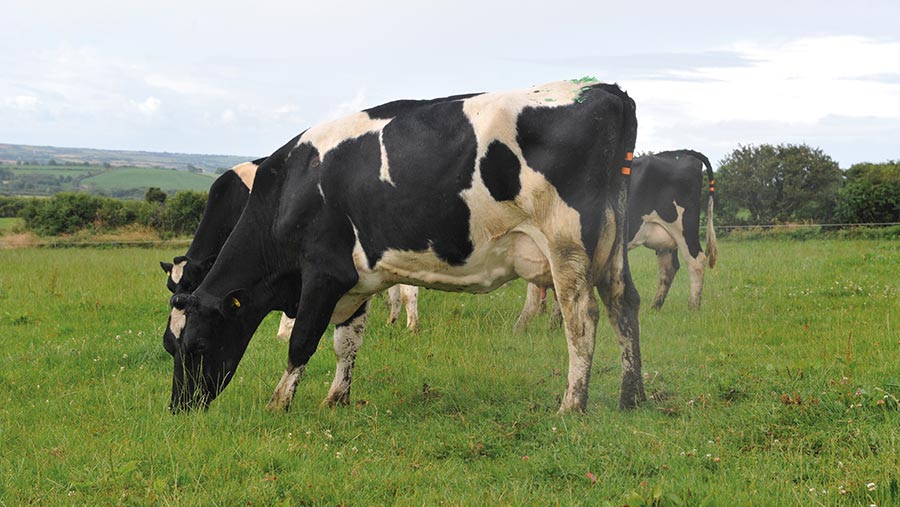 Genomically testing replacements has flagged up a genomic profitable lifetime index (£PLI) gap of up to £286 between heifers at a Pembrokeshire dairy farm.

The Hannah family, who farm at Mountjoy, near Haverfordwest, screened 94 heifers at 20 months old as a Farming Connect demonstration farm project.

Their aim is to fast-track genetic gain in their spring-calving herd and improve the lifetime productivity of cows by using information about an animal’s genetic merit before first service.

See also: 6 tips on using genomics in your dairy herd

Based on £PLI, the top-ranked animal had a +£282 genomic £PLI compared to the bottom at £-4, resulting in a lifetime earning potential gap of £286 between the two.

As the farm supplies Arla on a solids-based contract, identifying animals that have the best fat and protein traits can make a big difference to the bottom line, says dairy business consultant Andy Dodd of The Farm Consultancy Group, who analysed the figures for Farming Connect.

Even when considering the testing cost of £25-£30 a head, there can be a big cost-benefit from genomic testing, he believes.

At Mountjoy, the genomic somatic cell count (SCC) index ranged from +16 in the bottom-ranked heifer and -4 in the top.

“Genetically, this is one trait to improve. SCC is challenging to select for in spring-calving herds using New Zealand genetics as they only have a minimal weighting for SCC due to different milk contracts,” says Mr Dodd.

Although all the key transmitting traits tested for showed differences between the top and bottom, as a group, overall, the figures were quite similar.

Mr Dodd attributes this to a tight breeding policy over the past 10 years.

To test how well the genomic predictions reflected the actual performance, they were compared to first lactation milk recording data from 2021.

Mr Dodd says the trend on fat and protein showed a “reasonable” correlation.

“This is positive and what we would expect,” he says.

There was much less correlation on SCC as a group average.

“But when we look at individual animal recordings and genomic predictions, the link is clear to see, with animals predicted to have poor SCCs often showing a spike at some point during lactation,” says Mr Dodd.

Further gains can be made from inseminating with sexed semen based on a heifer’s genetic merit ranking.

In the long term, genomic testing of females enables highly accurate selection of replacements, says Mr Dodd, who likens it to the selection of genomic bulls.

“Selecting for only the best replacement heifers and those that best suit the farming system can have a positive effect on farm profitability.”

But sire choice is important, too.

“You have got to select bulls that are going to do the other half of the job.”

He says the Hannahs would be best placed selecting bulls that score above 286 on £PLI in the first instance, as a filter, and then selecting for other desired traits.

The Hannahs had planned to use the results from the genetic testing to inform their decision-making around which heifers to retain, but, after a bovine TB breakdown resulted in a loss of 40 animals from the milking herd, all 2020-born heifers will enter the herd.

William Hannah, who farms with his wife, Heather, and his parents, Tom and Mary, says the project had been useful, with the results showing there is an opportunity for herds to get a good idea of heifer potential from a genetic test alone. 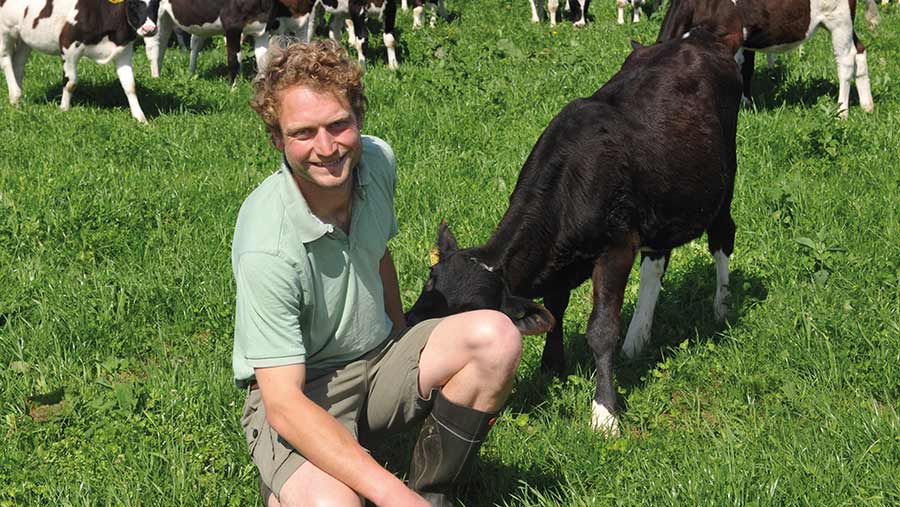 “I think the SCC information could be useful as a selection tool for heifers because the test showed a correlation between the lower-scoring animals and the ones that had SCC flare-ups during lactation.

“[But] if you are looking to get data on your herd, you won’t beat milk-recording for actual herd performance.”

However, use of genomics will now depend on the TB situation moving forward.

“I think the £286 is significant, although whether it makes the test worthwhile doing for us will depend on the farm’s TB and replacement demand.

“It’s not worth us testing here unless we can see we will have an excess of heifer calves on the ground. When we get to that stage then we will look at it again.”