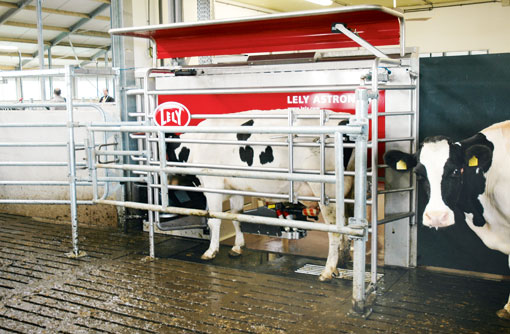 Making the most of the technology and services available to dairy farmers can help boost efficiency for those looking to expand, as Gemma Mackenzie finds out.

The use of new technology and services goes hand in hand with an expanding herd, as a North Yorkshire dairy farmer has shown.

In fact, for Andrew Leggott, who runs the 300-cow pedigree Cocklewood Holsteins herd at White House Farm, near Darlington, without the combined use of different technologies and services available, his expansion would not have been feasible.

The farm originally started with 60 cows in the late 1980s, gradually increasing to about 120 cows by 2000. However, the real expansion has occurred in the past four to five years and cow numbers have since reached 300.

“We are trying to breed a cow that will last in our system and produce a lot of milk; it’s all about producing as much as we can here to justify all the technology we have in place,” says Mr Leggott.

“We are trying to get every little aspect of the business efficient as possible, and I think if these new technologies keep coming out, we should be using them if they can help us.”

The key technology on Mr Leggott’s farm is found in the form of five milking robots, all bought secondhand from 2008 onwards.

“I have always been interested in the technology of robotic milking and we were always going to have to do something at that time because the parlour was getting tired and needed replacing. So when the secondhand ones came up for sale, we cracked on and bought them,” he says.

“I personally wouldn’t buy new robots, but there would be people out there that wouldn’t buy secondhand because they want the peace of mind of having a warranty – we have ours on the best service contract available.”

On the benefits of robotic milking, he says it has allowed him to maximise milk production from the high-yielding cows in the herd, as well as enabling him to spot any mastitis or lameness issues early on.

“The year we got the robots we soon realised what the pluses and minuses were. It does take a bit of getting used to and we have to use cake to entice the cows to go in to get milked,” he says.

“And because we have to feed the cow to get them to go into the robots anyway, it’s essential you have cows that are giving a good amount of milk. Also to really take advantage of the robots, you need to tighten up your calving.”

Expanding more on the health benefits of robotic milking, he says: “The robots flag up on conductivity and any cases of mastitis, and I would say you can get on top of it sooner than if you were milking manually yourself.

“Every morning and afternoon we get every cow that has not been in the robot for the past 12 hours and gather them up, and that’s when we find out about any lameness or other health problems.”

Top-notch nutrition is also key to ensuring Mr Leggott’s herd achieves an average yield of 10,500 litres a cow a year – something which is aided by the visiolac milk analysis tool, launched in 2011.

And according to BOCM Pauls nutritionist, Keith Colley, the analysis tool, which measures the efficiency in which cows covert feed into milk, based on the levels of saturated fat present in the milk, gives producers an “interpretation of what the cows are doing with their feed”.

So how does this work on Mr Leggott’s farm? “It gives us a breakdown of everything, and it’s been really good to find out whether a cow is milking off her back or if the milk is coming from what we are feeding her,” he says.

“Essentially we are trying to find out the total costs of feeding a cow, and hopefully visiolac will help us to improve the efficiency of the diet. We can get a total diet cost and work out how many kilogrammes of diet a litre we need to feed without compromising the cow.”

Nutritional planning is also linked up to collars, which were purchased at the same time as the robots, and link up feeding to automated out-of-parlour feeders in the cow sheds.

Mr Leggott says: “The collars hold information on average milk yield and by taking that average we can work out what we need to feed the cows in the robot and out-of-parlour automated feeders. For example, if a freshly-calved cow goes from 40 to 50 litres, we want to be changing the diet gradually.”

Rations are formulated on the basis of 30 litres plus maintenance for the high yielders and 18 litres for the low yielders, with the ration consisting of grass silage, whole crop, wheat and pressed pulp.

In a bid to tighten up calving and maximise the potential of the robotic milkers, Mr Leggott uses the reproductive management system (RMS) from Genus, and as a result the calving period has gone from 425 days to 395-400 days.

According to Genus’ Colin Lucas, a steady flow of fresh-calved cows is crucial to Mr Leggott’s robotic milking system.

“Mr Leggott uses the system to help achieve high pregnancy rates, currently at 20% – something he puts down to having a consistent approach to bulling cows and someone focused on getting the cows back in calf,” he adds.

Mr Leggott says: “It has really helped us focus on fertility; we do use the activity monitors, but more as a guide than as something that’s set in stone.

“We are really trying to feed the cows to our best ability. We calve heifers in at 24 months of age, but my aim is to try and get them calving in at 22 months.”

And all of these technologies and services would not be as successful were it not for accurate record keeping and health planning, says vet Mark Glover, from the Kebir House Vet Group.

Recording is done via the InterHerd programme, which according to Mr Glover produces a “routine copy of all the health events that happen to the cows on the farm”, something which is vital in identifying any problems affecting herd performance.

He says: “We record the data and keep very high-quality records, which are critical in helping Mr Leggott look after the herd properly. It provides him with management information on a day-to-day basis.”

Mr Leggott adds: “I think we would end up in a right mess if we didn’t have a system in place where we recorded everything. You need disciplines and protocols in place so that everything that needs doing, gets done. And you can really see the benefits of this in your annual performance figures.”

Going one step further, the InterHerd Plus programme is also used on the farm. It analyses the data and information gathered in the InterHerd programme, making it easier to see short-term changes or trends in the herd’s performance.

Mr Leggott says: “We can identify any short-term issues with the herd, for example, in the past when the milk protein levels dropped, fertility dropped.”

The role of technology

• InterHerd – flags up any problems within the herd quickly