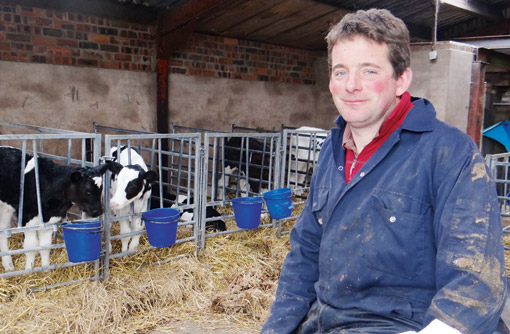 What is the secret to getting good conception rates from sexed semen? A Cheshire farmer shares his experience.

When Cheshire farmer Ed Seaton first started using significant quantities of sexed semen on his 240-head dairy herd, he thought he knew the benefits it would bring. Having dabbled in the product several years before, he knew it could be relied upon to give him dairy heifers; he felt confident the heifer calves would be more easily born; and he knew that it would free a good proportion of the herd to be served to beef.

But what he hadn’t anticipated were the longer-term benefits, which he describes as creating a “virtuous cycle”. These included helping to breed good fertility into his herd; helping to rid the herd of disease such as Johne’s and neospora; and potentially helping to overcome the difficulties of marketing cattle when the herd was closed with TB.

Mr Seaton had moved with his family to Kynsal Farm in Audlem, Cheshire about 10 years ago, favouring the new premises as it gave the family the chance of expansion.

But having only halfheartedly used sexed semen on the previous farm, and not having always achieved the conception rates he had hoped, he had to be persuaded to try the product again.

“Cogent were trialling their sexed semen calculator at the time, and they believed I could improve the farm income by £55,000 if I used sexed semen,” he says. “This benefit would come from only breeding and rearing the dairy heifers I wanted and putting the rest of the herd to beef, which they showed would create a substantial extra income.

“Despite the price premium of sexed semen, the overall semen costs across the farm would be lower because we wouldn’t be wasting dairy semen producing bull calves and we’d be paying less for the beef semen,” he says.

“Some of the other benefits, such as easy calving and faster genetic gain were not even included in the calculation,” he adds.

With a degree of caution, the decision was taken to use sexed semen on limited numbers around a year ago, and to carefully monitor performance.

“We didn’t go mad with it at the very beginning, as we wanted to see what sort of conception rates we could achieve before making a bigger commitment,” he says.

But achieving a conception to first service of 65 % for heifers and 55% for cows reassured the family and they began to use the product more widely.

“We’re now using it across all maiden heifers unless we know there’s a risk of Johne’s disease or neospora they could pass on to their offspring and on through the herd, and we avoid heifers whose mothers have a history of poor fertility,” he says.

Similarly, he carefully selects anything up to fifth calf cows to breed to sexed semen, only choosing those with a good record for fertility and no history of milk fever, metritis or difficult calvings to produce the herd’s dairy replacements.

“All of this means that record keeping is very important,” says Mr Seaton. “But if you know the cow is straight, you are not only far more likely to get good conception rates, but you’re also breeding the type of fertile and disease-free cows you want for your herd.”

Also remarking that the resulting heifer calves are more easily born, he says: “It’s a virtuous cycle as if you have less trouble calving, you’ll have more animals available to put to sexed semen next time.”

Dairy bulls chosen for service include Cogent Azure and Bakombre, which Mr Seaton hopes will transmit good milk production and build the type of cow he wants, with good legs, feet, udders and fertility.

But there’s far more involved than simply choosing the right genetics, and Mr Seaton says the insemination process is key to success.

“Following the handling process to the letter is absolutely essential, and most important of all is getting the semen into the cow as soon as it has thawed,” he says.

“Using an electric thawer is essential, as you need to thaw the straw for exactly 40 seconds, and heifers and cows should be close by and well restrained for quick and stress-free insemination,” he says.

Andy Smith from the Cogent Group says it is the small details that count and adds: “That’s things like using tweezers and never fingers to handle the straws; handling only one straw at a time; pre-warming the AI equipment; thoroughly drying the straws; and depositing semen in the uterine body and not into one of the uterine horns.”

A strong standing heat is also considered essential and Mr Seaton says all animals selected for sexed semen will have been seen on heat for one cycle before insemination. Each cow is given up to two services with sexed semen and anything returning to heat will be inseminated with beef or served with a sweeper bull.

“This gives a sexed semen use of 1.72 straws for every heifer pregnancy and 2.2 straws for cows, which indicates to me its use isn’t compromising our conception rates at all,” says Mr Seaton.

Carrying out DIY AI helps with timing, as service can take place precisely 12 hours after the first signs of heat. Activity monitors for the cows are also said to have transformed heat detection and are now being considered for maiden heifers too.

The condition of cattle is also regarded as paramount, and both heifers and cows are indoors and settled on a stable diet before insemination.

Today, about 45% of the herd is inseminated to sexed dairy semen and 55% to beef, with an unexpected bonus on the horizon from the new stream of about 120-130 beef calves a year.

“We have been selling British Blue crosses through Market Drayton market, but we’re now discussing a contract to provide Morrisons with Shorthorn cross calves,” he says. “This will secure a reliable market for all our beef calves whether or not we are under movement restriction.”

So, is the farm achieving the extra income predicted at the start by the sexed semen calculator? “It’s having a big impact on income every week because we are selling calves at a premium,” says Mr Seaton.

“Instead of coming back from market with a cheque for £30 for two or three Holstein bull calves, we may come back with £800 or £900 for the beef crosses.

“Over 12 months that makes a huge difference, so while I can’t say we have hit the prediction yet, we are heading in that direction.”

But as a pedigree Holstein breeder who aims to expand the herd he says: “The main benefit for me is breeding replacements from the cows we want and improving our cows and their fertility all of the time.

“The beef business is definitely working well, but with herd expansion to 280-300 head on the cards we’re going to need more heifers, so the chances are we’ll be using more sexed semen.”