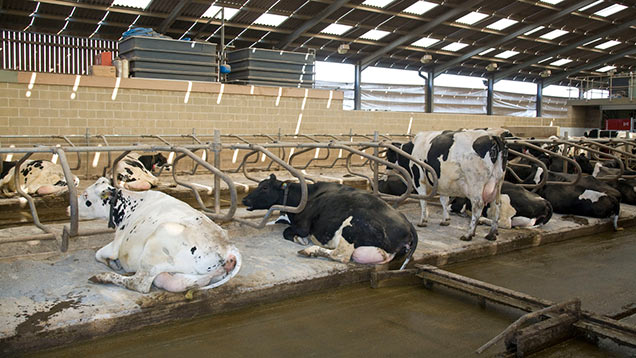 UK dairy farmers could be getting extra 3-4 litres of milk from their cows a day and improve health by investing in adequate ventilation and lighting in housed areas.

That’s according to US dairy consultant Michael Wolf who said many dairy farmers in the UK could be doing a better job of ventilating their buildings.

He said ventilation was the “poor orphan” and the last thing farmers thought about.

However, the impact of poor ventilation and as a result, heat-stressed cows could have on cow performance was huge.

“Farmers do a great job of making sure they have got the right cubicles, bedding and feed, yet they often don’t think about ventilation.

Traditional UK barn designs using Yorkshire boarding and a lean-to approach, with shallow pitches, means you don’t get much airflow through the buildings. And even when buildings are open sided it still doesn’t allow air in.

If cows aren’t able to cool down and their temperature rises, the consequences on cow health and productivity could be devastating.

Dr Wolf said a 0.5C increase in uterine temperature one day post-insemination would be enough to reduce conception rates by 7%.

Added to that an increase in body temperature could also lead to a decrease in milk yield as cow’s dry matter intake decreases.

When cows are not adequately ventilated and their thermal heat index increases, they stand up to try and get better airflow, or move to an area that is cooler.

This increases standing time can also lead to an increase in lameness and a decrease in production.

Dr Wolf said if there was one area farmers were to invest in ventilation then it should be in the collecting yards.

At 20C you should be starting cooling strategies. A cow’s thermal neutral zone is from -7 to 20C and after this she can get stressed.

He said the industry needed to start thinking about effective cowside velocity (ECV), which measures how well we are delivering air to the cow’s side.

There are lots of microclimates within a barn and you need to make sure that everywhere is comfortable. For this you need fresh air exchange.

Dr Wolf said the best fans to invest in were cyclone fans, since they are designed specifically to create maximum ECV to cool cows and also create a laminar airflow (all air travelling horizontally in the same direction and at cow level) below six feet high.

He said cyclone fans could also be paired with high pressure fogging systems and would de-stratify the air across the barn. The zone of influence for a cyclone fan is 1.5 times the diameter of the fan.

In comparison high-volume low-speed fans (HVLS) de-stratify the air by mixing it vertically and creates large volumes of air movement, but are less effective at creating ECV in cow cubicles, unless they are mounted over them.

“HVLS fans tend not to create an effective air exchange,” he said.

Austin Knowles installed variable speed fans into his barn in July 2014 after problems with heat stress had emerged the previous July.

“July 2013 was a hot summer, and in that month we only got six cows pregnant and the main problem was because of a lack of ventilation in one of the barns.”

He recalls a lot of the cows sweating and bunching up in the coolest area of the barn and said the impact was a milk yield loss of 3-4 litres a cow a day on hot days over the summer, as well as the fertility losses.

While Mr Knowles could not give a calculation for his return on investment he said: “The fans have rounded off the whole system, it’s made it work.”

Dr Wolf said increasing the duration of lighting to 16 hours and keeping the lighting intensity at between 100-200 lux, is enough to suppress melatonin, which naturally increases at dusk.

By suppressing melatonin levels you get an increase in hormones, which affect multiple liver functions regarding glucose, protein and fats and provide more substrates for milk production.

Long-day photo period lighting has been shown to increase milk production by as much as 15% and dry matter intakes as much as 6%.

Dr Wolf said it takes two to four weeks to see the effects from the lighting.

Short-day lighting in the dry period

Likewise, having a short day photo period applied during the last 21 days of the dry period could also increase milk yields.

Studies have shown when less than 20 lux is applied for 12-16 hours a day in the last 21 days of the dry period it caused a 2.1kg increase in milk yield a cow a day or the equivalent of 640kg over a cow’s lactation.

.Some research has also indicated it can have a benefit to the immune system.

In 2014 dairy farmer Grant Hardman installed long-day lighting using VES induction lights into one of his new barns. Cows are exposed to 18 hours of light with six hours of darkness every night, with a break during the dry period.

He said he decided to do it after he visited farms in the US where it had increased milk yields by 8-13%.

“We also installed it into our older buildings and this is where we saw the biggest benefit. We saw a 300 litres increase in milk yields from 80 cows in a week when we installed long day lighting in the old barns,” he said.

He recalls they also ate an extra 3-4kg of dry matter a day.

“With the additional milk yield of three litres a cow a day the payback is about six months,” he said. He also notes fertility has improved and bulling behaviour is stronger.