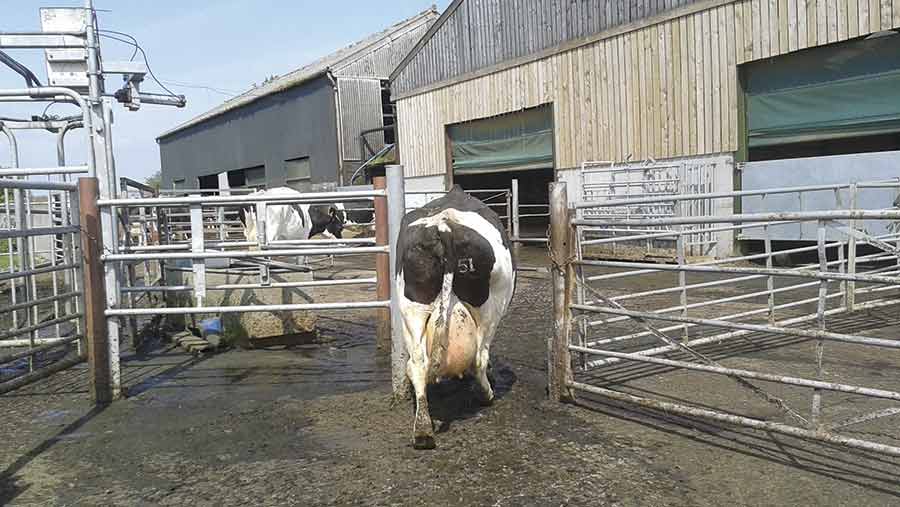 Dairy farms with indoor feeding systems are well adapted to robotic milking but automatic milking units can be successfully integrated into grazing systems too.

Milk production at Handfield Farm is grass-based with the high-yielding pedigree herd of 201 Holstein Friesians producing 4,200 litres from forage, of which half is from grazing.

The business is run by father and son, Richard and Robert Yarwood. They switched to robotic milking over seven years ago.

“This system allows us to provide a higher genetic Holstein with a suitable environment to deliver a higher yield at grass while keeping our feed costs down,” says Richard.

“Some robot herds in the UK seem to be feeding four tonnes of concentrates a cow but our annual average is 2.5t or 0.27kg a litre.’’

Feed costs at Handfield Farm are 6.2ppl annually. “Out of necessity we have had to feed very economically last summer by challenging high-quality silage and grass and we have made some progress.

We have cut 1.3ppl off our annual feed costs and are obviously aiming lower still this summer at 3.5ppl on 32.5 litres.”

Mr Yarwood admits running the system around pasture consumes energy, but he believes allowing cows access to the outdoors is important for their welfare and for public perception. He says it makes sense economically too because it keeps costs down.

This year, cows were turned out to grass on in mid-March, to a rotational grazing system incorporating 16 one-day paddocks. Poor conditions in April saw the herd back inside for a few weeks.

Following a light, dry first cut on 9 May the grazing emphasis is focused on aftermaths, which are set stocked and grazed in the daytime.

Half the turnout block has been closed up for second cut. “Our grazing system makes full use of the software linked to the segregation gate, which is at the other end of the farm buildings, away from the robots,” Richard explains.

“All the cows get access to all three robots and the time schedule bars on the software program determine which direction they go in.

“We have two tracks, A and B, going in opposite directions with one-way gates for the cows to return into the building area.

Cows return from one direction, get milked and exit up the other track. If we were running an all-grass system with a lower genetic cow, we might have a three-way grazing system, especially if all grassland was accessible.”

The buffer ration consists of a silage and wholecrop mix of 6kg dry matter or big bales at the same dry matter level to balance the dry matter intake and dietary protein and fibre.

The software is programmed to allocate concentrates in the robots and out of parlour feeders. “The robots don’t stop pre-dawn so the high yielders need this buffer ration to meet their needs from those extra milkings,” says Mr Yarwood. 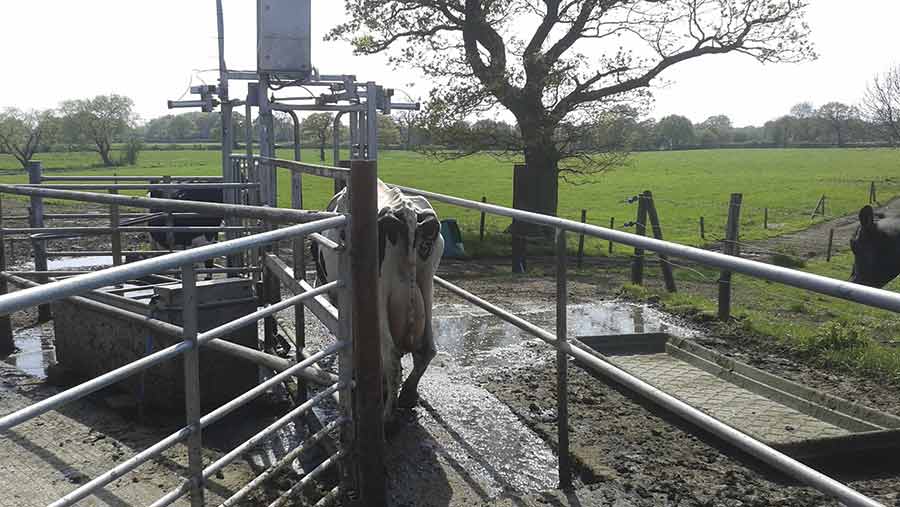 Mr Yarwood says the number of times his cows return to the robots from the paddocks is influenced by the numbers of days calved, their age and yield as well as other factors including residual grass covers and the weather.

“Whether you intervene to keep the robots busy depends on your priorities but I expect the machines to be working,” he says.

“It never ceases to amaze me how well the cows have adapted. When I look at the computer in the morning to review what has gone on overnight it shows a steady process of milking right the way through the night.

“Within two or three minutes of being milked the cows will have passed through the segregation gate and made their way off up the track in ones or twos to a designated paddock.’’

Cows are milked on average 2.5 times in a 24-hour period during the grazing season and 2.8 times when they are housed – achieving an average daily yield of between 30 and 32 litres a head or 9,200 litres a cow a year.

Higher yielding cows – those producing over 50 litres – will milk three times a day while at grass and four times during the winter.

Longevity is enhanced by this regime with the culling rate currently at 15% and the best performing cows exceed 100t.

The Yarwoods sell their milk to Muller Wiseman on a level, non-aligned supply contract.

Mr Yarwood was drawn to automatic milking for a number of reasons. “It represents a more desirable working environment for me and my son but I am also fascinated by the idea that the milking routine can be automated.

With good stockmanship cows can be trained to be milked at will and thereby express their potential.”

He admits automatic milking might not fit with the ‘keep it simple’ mindset of other grassland farmers but adds: “As long as the herdsperson is bright enough to use the software and adapt the equipment to suit the system it opens up all sorts of avenues.

“The robots were a substantial investment but we have saved on building costs because you don’t need collecting yards with this system. We use the old parlour area as a cow handling system.”

Robotic milking in grass-based systems is seen as a possible solution to farm fragmentation.

Bernie O’Brien, a senior research officer at Teagasc in Ireland, says the system allows the milk producer the option of placing a robot on outlying land to expand cow numbers.

“Depending on the size of the herds, this could be carried out without hiring significant additional labour or certainly by hiring less labour than having another conventional system on the outside farm,” says Dr O’Brien.

Research is being undertaken at Teagasc on the practical challenges of integrating automatic milking and grazing. Irish milk production is grass-based with 90% of of the cow’s diet during lactation coming from grazed grass.

In 2014, an automatic milking system was used to milk a spring-calving herd of 70 cows at Moorepark.

A three-way grazing management system was put in place to promote the voluntary movement of the cow to the milking unit at appropriate intervals.

The farm was divided into three grazing sections and cows grazed defined areas during a 24-hour period.

Cows were trained to move between the grazing section in the knowledge that they would be rewarded with fresh grass in a new paddock.

As they moved between sections, the cows were diverted through the milking yard.

Cows were outdoor grazing on a part-time basis from calving until 27 February, after which they grazed full time.

Cows received 400kg of concentrates during the year. Average annual milk yield per cow was 4,400kg and 380kg milk solids.

“These yields were lower than average due to the presence of Jersey cows in the herd and experimental milking frequency treatments being applied to the cows,” says Dr O’Brien.

“An average milking frequency of 1.8 milkings a cow a day was achieved during the complete lactation.”