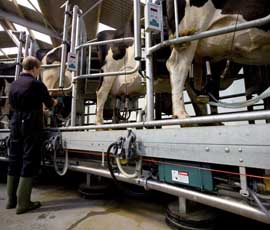 If your cows are in good health, but not milking as well as they ought, mycotoxin contamination of feed could be to blame, suggested David Parfitt of feed additive supplier, Micron Bio-systems.

Speaking at the Large Herd Seminar, Mr Parfitt said mycotoxins were a growing problem and could affect most livestock feeds, whether raw material or processed ingredients, bulk stored, ensiled or bunkered.

He suggested the following areas to look out for on farm: