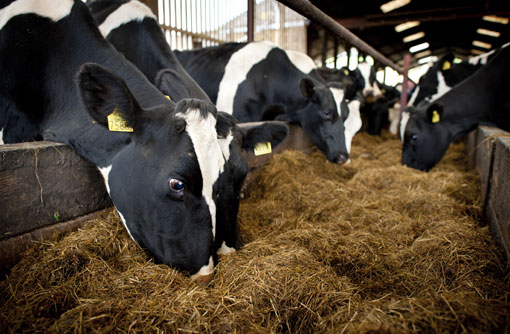 UK dairy farmers could be losing up to £23,000 a year for every 100 cows, due to the presence of the metabolic disease ketosis.

Ketosis is a metabolic disease usually occurring in early lactation when cows enter a negative energy balance. When the energy demand exceeds the energy intake, the cow begins mobilising fat leading to the production of ketones, which at high enough levels can cause clinical and subclinical disease.

The main reasons for ketosis are nutritional imbalance and over-conditioning in late lactation, the dry period and around calving. These can result in both clinical and sub-clinical ketosis, explained Dr Esslemont at the recent World Buiatrics Congress in Lisbon.

“Ketosis – even when at sub-clinical levels – will put cows at an increased risk of suffering from a wide range of other metabolic and reproductive diseases, these further reduce income and add extra cost.”

The direct costs of ketosis include the time input by the vet and herdsman, drugs, discarded milk and reduced yield.

Dr Esslemont has also identified and costed out the indirect costs of ketosis in a typical herd. These include increased risk of other diseases and reproductive problems such as higher cases of cystic ovaries, LDAs, retained foetal membranes and metritis.

“Longer term, these lead to extended calving intervals, higher culling rates, extra services per conception, and an increased risk of fatality,” he said.

“Ketosis – even when at sub-clinical levels – will put cows at an increased risk of suffering from a wide range of other metabolic and reproductive diseases, these further reduce income and add extra cost.”
Dr Esslemont

He estimated that the reduction in fertility would extend calving intervals by up to 22 days and increase involuntary culling rates by 20% in affected cows.

And in terms of monitoring and preventing ketosis, David Black of Paragon Vets, Cumbria, said monitoring and keeping dry matter intakes up was crucial.

“Monitoring is definitely something that should be taken at a herd level. Herd side testing using a system similar to that used by diabetics, which requires a small blood sample, will give an instant result, making monitoring easy. Monitoring half a dozen cows every few weeks will only take a few minutes.

“Keeping dry matter intakes up is also key to minimising the energy deficit,” he said.

Vet Andy Biggs of the Vale Veterinary Centre, Tiverton, described the cow as a “metabolic athlete”. “It is hard for a high-yielding cow to meet its energy demands at times. A 700kg cow at peak lactation could be giving up to 60kg of milk a day, that’s almost 10% of her body weight,” he said.

Maarten Boers of the Livestock Partnership said one of the main reasons he saw ketotic cows was because of poor dry cow management.

“Dry cows being in too good a condition can be a problem – they do not want to be more than 3.5 body condition score at drying off. Feed space can also be a problem in dry cows. If they are restricted feed, then they will start mobilising body fat.

“It is a problem we see in higher-yielding herds, so it is vital the diet is sufficient and animals are not restricted from feed. It is a disease that can be treated with a drench of propylene glycol but we should be looking to prevent it,” he said.