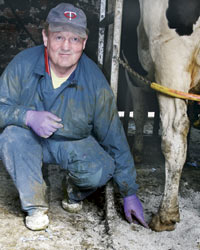 Even if routine foot trimming is carried out 50-60-days after calving, it’s likely any heifers with severe foot lesions could have been diagnosed much earlier and essential corrective action taken.

“Heifers picked up with foot lesions once they’ve moved into the milking herd are likely to have had them when they calved. Any herds experiencing problems with the feet of calved heifers and young cows should be looking at routine treatment before these animals move into the main herd,” says Mr Blackburn who runs the Black Cow Consultancy, Cheshire.

Heifers with foot lesions pre-calving usually show no sign of the problems waiting to erupt after they calve. “A lot just get away with it because they aren’t under the physical pressure they suddenly find themselves under once they’ve calved.

“Many will move from straw bedding to concrete and have to cope with the usual post-calving stress caused by milk production, diet change and more competition in the cubicle house. This is more than enough to trigger foot problems that have gone un-noticed in the run-up to calving,” says Mr Blackburn.

More emphasis is being placed on preventative foot care, which usually involves trimming all cows at drying off and having an external trimmer to trim problem cows.

But Mr Blackburn suggests this approach may not be the only approach to reducing lameness.

“Cows are likely to suffer chronic foot problems brought on by depressed feed intake, a damaged immune system and possible liver problems. I believe lame dry cows have a 90% chance of having long-term foot problems during their productive life.

“The last thing any herd owner should tolerate is lame cows during the dry period. If they are lame at this stage they are likely to suffer lifetime foot problems.”

Checking feet at the dry cow stage is still important, but shouldn’t be considered a cure for all foot problems. Regular foot-care should aim to achieve the correct foot shape to enable the cow to walk and function correctly.

“White line disease and sole ulcers tend to occur 70-120 days post calving. So if you are trimming feet at 60 days before cows are dried off and add another 100 days, that means you are at the 160-day stage post calving, by which time it’s impossible to tell if a cow’s foot had been trimmed – especially in cows which are then at the high risk point for sole ulcers,” says Mr Blackburn.

Dairy farmers should consider routine inspection of heifers’ feet about 60-days pre-calving to check for lesions or any uneven growth of the claws. It may be necessary to pare off a small amount of horn to check for any bruising on the sole.

The 500-cow Cotton Abbotts herd at Waverton near Chester, owned by the Walley family, has a regular monthly visit from a foot trimmer and while that will continue, herd manager Steve Phillips is keen to increase routine foot care as part of day-to-day management.

“We can certainly be more pro-active in our approach to lameness and start trying to spot problems before they lead to lameness,” says Mr Phillips.

A new member of the farm staff is interested in foot trimming and will receive training, with the aim of undertaking preventative foot care.

Mr Phillips says improving preventative foot care will avoid the foot trimmer having to deal with problems that have been left too long.

Mr Blackburn also believes there should be the skill and the handling facility to make sure any lame cow can be dealt with within 24-hours.

“Every dairy farm should have someone who is a competent foot trimmer. When it’s only lame cows given to the foot trimmer every month it’s only tackling the tip of the ice-berg. I’m sure most foot trimmers would like to be providing a preventative service rather than a salvage operation.”