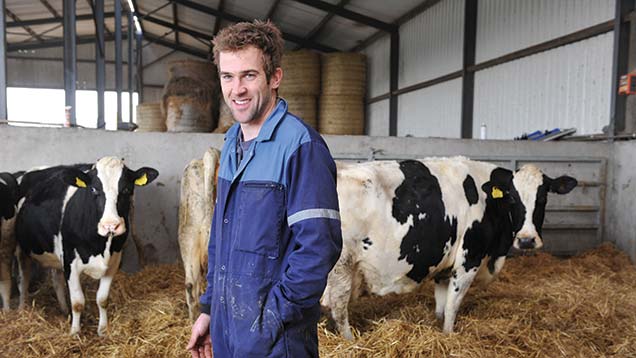 An Irish dairy farming partnership says expanding their herd from 100 to 170 cows to produce an additional 550,000 litres of milk post quota will offset a lower milk price this year.

Despite the downward pressure on the milk price, the family views the ending of quotas as an opportunity to grow their business at Ringlestown Farm, Kilmessan.

They remain confident about the future prospects for dairying and are pleased they pressed ahead with their expansion. Buth they say land availability in Ireland could put the brakes on further expansion.

“The removal of quotas can’t come quickly enough – we have felt that we were being held back,’’ says Peter Farrell, who farms with his father, David.

Milk is sold to Glanbia and the Farrells are paid a bonus for producing milk high in butterfat and protein. Last year the herd achieved a milk solids average of 504kg a cow, but this year’s target is 530kg with 4.2% butterfat and 3.5% protein.

Some 80% of the herd is calved in the spring and until now the remaining 20% was calved in the autumn, for three weeks from mid-November. The main objective of splitting the herd was to meet Glanbia’s liquid milk contract of 1,150 litres a day.

But this year the autumn block has not been served to calve in the autumn.

“We are just producing enough milk to fill that quota,’’ Mr Farrell explains. He said it doesn’t make financial sense to produce more as he gets the maximum price for liquid contract milk and a lower price for surplus supplied.

The cows will instead be served in May, to calve in the following spring. “The liquid milk bonus barely covers the cost of producing milk in the winter. Not only is the feed price higher, but there are labour costs associated with dealing with different groups of youngstock. It will be easier to manage one herd,’’ he explains.

“We select bulls from the National Cattle Breeding Centre with 30kg of combined fat and protein in their index. We want a cow that can pack in 550-600kg of milk solids,’’ he adds.

The family has just completed work on installing a 24-point parlour, handling unit and slurry storage at their County Meath farm, representing an investment of €250,000 (£181,000).

An additional €17,000 (£12,000) has been spent on installing 1km of roadways and drainage on recently purchased neighbouring land.

Drier conditions on the new land facilitated turnout of the spring calvers in January for the first time, so the investment is already paying off.

The cows are AId entirely to Holstein Friesian sires. Stock bulls are run with the herd for six weeks after the six-week serving period. Heifers are served to Jersey-cross, easy-calving bulls. “Every heifer calf is reared,’’ says Mr Farrell.

The herd replacement rate is currently running at 20%, but the Farrells have adopted a tough culling policy in the past few years now that they have a large number of higher EBI replacements coming through.

Based on the current herd number of 135 cows, 108ha of land farmed is stocked at two livestock units/ha. Last year the farm grew 15.3t/ha of grass dry matter. One tonne of concentrates a cow is fed.

This year the spring calvers were grazing from 26 January, 20 days earlier than the average for previous years.

Although good weather was a factor, the new block of land facilitated early turnout. “The ground is drier and there is good infrastructure,’’ Mr Farrell explains. “We can get the cows on and off the grass and strip graze without the cows needing to cut back over the field.’’

He says paddocks were not established on the land because strip grazing allowed for more flexibility.

Although the Farrells had the chance to buy additional land last year, they see land availability as the biggest limiting factor to further production.

“The availability of land is going to be a huge barrier for many farmers. Ireland has small, fragmented farms. Access to land will be the new quota for many. If land was to become available around the milking platform, we would have the infrastructure in place to increase output by another 40%.”

Although unwelcome, the downward pressure on the milk price won’t force the family to change its plans for the future.

“We knew the price would be lower this year, so our business is prepared for that,’’ says Mr Farrell. “We get a five cents [4p] a litre bonus on top of the base price because our milk is high in solids, but even if the price bottoms out at 27 cents [20p], which we are told it well might, we will be OK if that is as low as it is going to go.’’

He is confident that expansion was a good decision. “We can close the cheque book for this year. The capital expenditure has been a massive drain on cash, but it is now all done and financially accounted for. We won’t have any capital expense this year.’’

In fact, Mr Farrell says expansion has come at a good time, because it will result in additional milk just when the business needs it. “We will be producing 40% extra milk this year and that will help offset the drop in the milk price. Although we have budgeted for 170 cows, we should be up to 180 by mid-April,’’ he adds.

He is very upbeat about the future of dairying. “There is definitely a good future if we can keep our costs and spending under control.’’