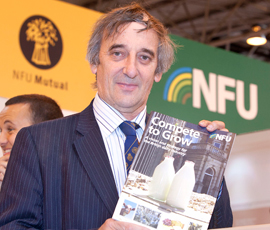 The prospects for UK milk producers look brighter over the next couple of years, according to farm leaders at the Livestock event.

Ian Macalpine, chairman of the Royal Association of British Dairy Farmers, said the past 12 months had been a very challenging, but he had optimism for growth within the industry.

“All the signals are that the world market should give the industry an opportunity to thrive in the future and the RABDF council, made up of 13 dairy farmers from throughout the UK is enthusiastic and optimistic about the future.

The positive message tied in with the NFU’s launch of a vision for the dairy industry which centres around increasing production by four to five billion litres by 2020.

NFU dairy board chairman Mansel Raymond said the British dairy industry was in pole position to become a national and international success story, if farmers and stakeholders worked together to enable the UK to compete better globally and make the most of the domestic market.

Mr Mansel said farm gate prices had risen in recent months and he believed there was scope for a further increase ‘sooner, rather than later’.

“If that comes down to dairy farmers and feed costs come down then we will be in a different place from 12 months ago.”

Farmers would then start to have the confidence to invest, which in turn would help them become more competitive, he added.

In a white paper released to coincide with the start of the show, Dairy UK said the industry was moving on from the challenges of 2012.

“Optimism, backed by encouraging long term forecasts for rising global demand, is not misplaced,” said Dairy UK chairman Billy Keane. “We must exploit these opportunities to the full. We are well set to win our share.”