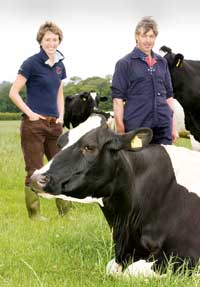 One year after adopting the DairyCo Mastitis Control Plan and cases have halved on a Wiltshire farm with savings of more than £15,000.

Last year we reported the costly mastitis problem in cows at Park Corner Farm, with an annual average of 82 mastitis cases per 100 cows.

Not only was this a serious disease problem, but financially it was costing the 140 cow herd an estimated £27,869 a year.

And it was with the help of vet Lucy Gill, Friar Moors Vet Clinic, Sturminster Newton, that mastitis has been tackled. Last year she was trained to use the DairyCo Mastitis Control Plan, a tool which guides control according to the diagnosis of the mastitis problem.

Park Corner Farm was one of the first farms she implemented the plan on, which involved farm manager Rob Fricker and herd manager Chris Bristol answering a comprehensive questionnaire.

They also carried out observation in the parlour and housing, looked at cow condition and grazing management, and an assessment of clinical case data and somatic cell counts.

Results from mastitis case data and cell count information indicated most cases were occurring during lactation. “This is why most of our effort has been focused on reducing cases during lactation,” explains Ms Gill.

One of the main problems identified by the plan as being a cause of mastitis during lactation was pasture management.

Prior to the plan, cows were grazed on different fields during the day before returning to the same paddock every night.

Grazing cows in the same paddock every night was a real issue because, ideally, cows should not return to the same piece of ground for at least four weeks, explains Ms Gill.

“However, these cows were on the same ground every night, allowing Strep uberis to build up on the pasture. This environmental bacteria can live on pasture for up to three weeks.”

Now the farm has adopted a system of tracks and paddock grazing and cows are grazed in different fields during the day and night.

Not only has this influenced the level of mastitis, but milk yields have also increased as a result of better pasture management.

“We now get 300 litres more milk in the tank during the grazing season, because cows are getting more from grass” says Mr Fricker.

Adopting a network of tracks has reduced mastitis cases because udders are cleaner, and the ground doesn’t get as poached in wet weather.

However, Mr Fricker aims to improve tracks further with a hard core base, so soiling of feet is limited further even in bad weather. 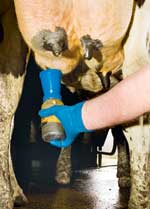 Pre-milking teat preparation was also an area highlighted by the plan as having a high mastitis risk.

Previously cows were dry wiped, but not pre-dipped.

Admittedly Mr Bristol says they would look for the quickest and easiest way to get jobs done in the parlour.

“We appreciated this wasn’t the correct approach to be taking and although there is a lot more running about now, because we allow 60 seconds from pre-dipping to cluster attachment, it is an important step in the control of mastitis,” he says.

During the winter cows are also prevented from lying down for the first hour post milking by being offered fresh feed, says Mr Fricker. “By doing this it allows the teat sphincter to fully close before they lie down, minimising bacteria getting in.”

Cluster liners were not being changed frequently enough, with liners changed every six months which equated to 4320 milkings.

Now they are changed every 2500 milkings, the recommended length of time, which equates to every four months. “It is important we do this, as we have seen problems when liners have been used for longer than this,” adds Mr Bristol.

On cow observation in the parlour during the plan investigation a year ago, Ms Gill noted 40% of teat ends were damaged.

The parlour was subsequently tested which revealed problems with the pump and vacuum pressure leading to cows becoming over milked. Now parlour maintenance has become part of the routine and vacuum and pulsation pressures are regularly checked.

Apart from mastitis cases picked up during lactation, the dry period was also contributing to a rise in mastitis cases, explains Ms Gill.

“Cases during winter 2008/2009 peaked, and damp straw was a suspected cause, due to outside storage”.

Now straw is stored in a barn and mastitis cases of dry period origin will hopefully continue at a low level.

For the future, the aim at Park Corner Farm is to maintain levels where they are, but looking to improve the figures further if possible, explains Ms Gill.

“There are other areas that can be improved such as providing better indoor calving accommodation as this is a vulnerable time for cows picking up new infections.”