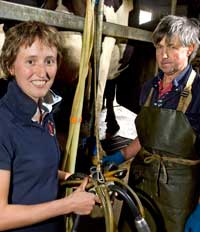 Mention the word mastitis and most dairy farmers will admit they have had a problem. So its no wonder it’s the bane of many farmers lives, since the costs associated with it run into the thousands.

But for a Wiltshire dairy farmer, help was at hand when the number of mastitis cases began to escalate.

With an average of 95 cows in every 100 contracting mastitis over a year, herd manager Chris Bristol (right in picture), at Park Corner Farm, West Knoyle, was happy to be one of the first farmers to try out the DairyCo Mastitis Control Plan.

“It was demoralising to see so many cows getting the disease. Not only was it an issue for cow health and welfare, but the expense associated with treatment and the time to taken to treat cows was also costly,” says Mr Bristol.

His concerns intensified last winter when then the number of mastitis cases each month became unacceptably high, peaking at 12 a month, including several fresh calvers with toxic E coli mastitis. “The problem was continuing and recurrence rates were high, so we decided to take a good look at the system,” says Mr Bristol.

Fortunately, his vet, Lucy Gill (left in picture), Friar Moor Vets, Sturminster Newton, had recently been trained to use the DairyCo Mastitis Plan, which is new to the UK. The investigation plan uses inbuilt tools to select specific approaches to reduce mastitis on farm.

“The plan makes you look at everything, which is critical, so important aspects aren’t missed out. It involves answering a comprehensive questionnaire, observation in the parlour, housing, cow condition and grazing as well as clinical case data and cell counts,” says Miss Gill.

Milk samples from high-cell-count cows and clinical cases were cultured in the lab and these results along with clinical mastitis and cell count data were then analysed, producing a diagnosis of the most important causes of mastitis on the farm.

The data was quite clear cut, demonstrating that peaks in mastitis cases were linked to seasons, says Miss Gill.

“In both summer and winter, there were too many cows picking up mastitis in lactation. One cause was environmental bacteria getting into the udder during lactation when cows were grazing. Also, during the winter, too many cows picked up infections in the dry period.”

“Instead of overloading farmers with dozens of points to implement, I worked with the plan to select a few key areas for the farm to work on.”

One of the key areas highlighted as a serious source in the summer rise in mastitis cases, was pasture management, says Miss Gill. “Strep Uberis can live on grass for up to three weeks and, ideally, cows shouldn’t return to the same piece of ground for four weeks. But at Park Corner although cows were on different paddocks during the day, they returned to the same paddock at night. This combined with the wet summer seen last year, would have been a major trigger for the rise in cases.”

Now paddocks are being rotated more regularly, and improving tracks is also being considered to help keep udders clean.

Other points being implemented include pre-dipping. “Prior to the plan, all cows were being dry wiped, but this wasn’t getting teats clean enough, enabling bacteria to enter the teat. However, when teats are pre-dipped prior to milking, this helps prevent environmental bacteria entering the teat canal at milking time,” says Miss Gill.

“Before, we would look for the quickest and easiest way to get jobs done in the parlour, although it may not have been the best way,” admits Mr Bristol.

“So now when we are pre-dipping we will work our way along the line and then walk back to the first cow we pre-dipped to put the clusters on. Stimulating the teats and then applying the clusters about 60 seconds later, encourages milk let-down.”

Miss Gill also observed a high proportion of damaged teat ends. And on her advice to get the parlour tested, results revealed the pulsation rate and vacuum pressure were incorrect.

Liners are now being changed more frequently every four months (every 2400 milkings) to prevent a reservoir of bugs forming.

Winter management of dry cows was also an issue highlighted by the plan. The data confirmed suspicions that in winter, too many cows were picking up mastitis in the dry period. “This winter we are going to try to ensure ample dry straw is used to bed down dry cows,” says Mr Bristol.

Already he has changed to storing his straw in a rented barn and all dry cows are being treated with Orbeseal, an internal teat sealant, instead of just antibiotic dry cow therapy.

It is hoped the mastitis plan can save Park Corner 30 cases for every 100 cows a year, equating to 42 cases for the 140-cow herd, which is a big saving, says Miss Gill.

“Figures show the average costs for a mastitis case is £177, so the plan could offer a potential saving of £7400,” she says.

Although the plan has only been in place a few weeks, Mr Bristol is already positive it is making a difference.

“The plan has made me more aware of problem cows and it is better to spend a bit more time implementing points than spending time tubing cows with mastitis,” says Mr Bristol.

To learn more about the DairyCo Mastitis Control plan and managing other cow health issues, visit the Dairy Event and Livestock Show 16 and 17 September