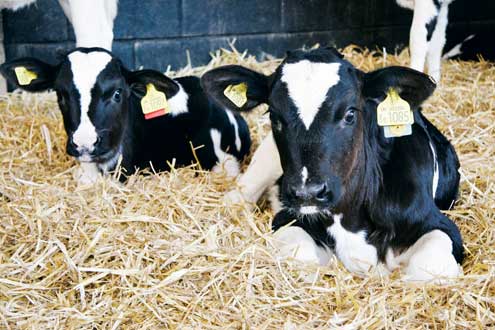 Having made the decision to expand dairy and beef numbers, Arwel Davies from Pantswllt Farm, Talgarreg, decided to take a different approach to calf housing.

Mr Davies milks 250 Holstein Friesians with his wife Mary and son Hywel and has reared youngstock in a number of different buildings.

“We have old cow sheds at the home farm where calves stay for the first three months,” he says. “The sheds are ideally located, but aren’t ideal in design, so we have to use forced ventilation to try and prevent pneumonia.”

“We are now rearing about 150 replacements and beef crossbreds, plus 40 dairy bulls a year. We move the calves up to the unit at three months old, and move them into the cubicle building as yearlings.”

Having used wooden boarding in the past, he decided to try a perforated metal wall called Highlight instead to improve light and ventilation at a similar cost and lifespan.

“I have been very pleased with it. It gives a better flow of air and makes the building light and airy as well. You can see straight through it to the outside.”

Although the vented wall is on the south-west face, 274m up and in an exposed position, it does protect against the wind and rain, he adds.

“We have got a 1.5m concrete wall with 3m of the perforated metal sheeting above it. We were surprised at how little wetness gets in – the cubicles get damp maybe two or three days during the entire winter. We’ve never had any health problems – the youngstock do very well up there.”

About three years ago he replaced 54.8m of walling on the eastern side of the cubicle shed at home. Mr Davies had used slotted metal panels, but replaced them with the perforated sheeting. “This has brightened up the building and improved the air flow,” he says. “The better the ventilation, the healthier the animals – I think the perforated sheeting is a big step forward.”

Getting the ventilation right in old – or new – livestock buildings is critical to animal health and productivity, but finding the right balance between fresh air and a chilling draught can be difficult, says Jamie Robertson, research fellow at Aberdeen University,

As a result, cows and youngstock can suffer from health challenges such as respiratory diseases, mastitis and poor growth rates.

According to Dr Robertson, more than half of our livestock buildings are not fit for purpose – and even new builds are often flawed in their design. “There are three key things we need to pay attention to in buildings: moisture, fresh air and air speed.”

The first place to reduce moisture is on the floor, says Mr Robertson. “If the floor is your problem, don’t expect better ventilation to sort it out. Most farmers allow far too much rainwater to get dirty, which means more slurry to handle and a greater biosecurity risk.

As warm, moist air rises, all livestock sheds need a hole in the roof – usually along the ridge. “As a rule of thumb, you need 0.04sq m a calf and 0.1sq m an adult or fast-growing youngster. Plus you need twice as much air inlet on the side walls – the aim is to have fresh air delivery to as many parts of the building as possible.”

The building use must also be considered. “There are additional problems when housing calves – you need fresh air to help prevent pneumonia, but too much air flow means they will get cold.” Many new buildings are too large for calf housing, so farmers should install ventilated kennels to keep the calves warm.

“Often, old calf sheds are ideal because they are low and warm – you just need to open up some gaps in the walls and roof to improve ventilation.”