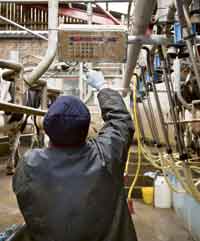 The milking machine has a fundamental part to play in mastitis control. Not only is it a place for harbouring infection, but it is one area where significant damage can occur to the teat end, says consultant Ian Ohnstad, The Dairy Group.

Farmers must be checking the machine daily to make sure it is not going to cause teat damage, adds Mr Ohnstad. “Testing the vacuum level daily is vital and you should be able to hear the vacuum regulator opening and closing when the cluster is attached.”

When the vacuum isn’t at the correct level, which in a low-level plant should be about 40-44kPa and in a high-level plant 44-48kPa, the teat can be damaged, he says.

“An incorrect vacuum level can cause teat end hyperkeratosis- a thickening of the skin that lines the teat canal, which provides an opening for mastitis pathogens to enter. A change in teat condition such as discolouration is a good sign there could be a problem with vacuum pressure or pulsation.”

Pulsation failures can also increase new infections and when there is deterioration in pulsation this can result in slow milking and teat damage, adds Mr Ohnstad. “When milking is slow the cow may not be completely milked out and this is a mastitis risk.”

Severe vacuum fluctuations in the claw piece can also cause liner slippage, which is one of the greatest causes of new infections, he adds.

Liner slippage can occur when:

* air bleed caused by a blockage – this could cause the cluster to flood with milk, bathing the teats in milk and presenting risk of infection.

“When you are getting more than 5% of units slipping in a milking, then something is wrong,” warns Mr Ohnstad.

And making sure liners are changed every 2500 milking is vital, says Westpoint Vet Group’s Keith Baxter.

“The liner is the part of the milking machine that has contact with the teat and over time the rubber perishes and potentially becomes a reservoir for pathogens. Using liners for any longer is a false economy as you will reduce milking speed and increase mastitis risk.”

1. A static test should be performed by a qualified technician every six months. This evaluates how the machine is behaving without any cows.

2. A dynamic test measures the vacuum and airflow rates while cows are being milked and ideally should be performed on an annual basis.

And it’s not just the machine that can influence mastitis risk, preparation of the teat immediately before is also vital, says Mr Baxter who recommends the following three steps.

2. Stimulate teat and leave 90 seconds prior to attaching cluster.

“Stimulating the teat is vital, because when a cow is inadequately stimulated there will be initial milk let down but it will then stop.

This is called bimodal milking and exposes the teat to the full plant vacuum which will damage teats,” says Mr Baxter.The same can occur when clusters are left on too long, as over-milking will also result in teat end damage.

Once the cluster has been removed the teat should be covered with disinfectant (either by dip or spray) within 30 seconds as the teat canal will still be open and vulnerable to infection.

When plants are not adequately clean it also presents a serious risk for infecting cows, says Mr Ohnstad who recommends the following cleaning procedure:

1. Make sure the correct amount of water is recirculating- 10-12 litres for every milk point and at a water temperature of more than 55C

2. Make sure the appropriate amount of chemicals are used.

4. Milk all clinical mastitis cows last. And when automatic flushing systems are not installed clusters used to milk mastitic cows should be disinfected manually, after each mastitic cow.