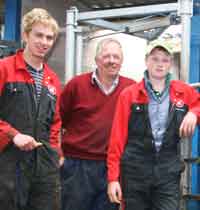 Six hours a day have been “freed up” on a Lancashire farm since two robots replaced an abreast parlour milking.

It’s making a big impact on the labour demands of John Hartley’s 140-cow Roughwood Holstein herd at Bashall Eaves, Clitheroe, but the switch to robots has also lifted yield and benefited cow welfare and herd health.

The two Lely Astronaut A3 robots were installed at Mason House Farm last November and were favoured over replacing an ageing parlour and introducing three times-a-day milking.

“We’d considered installing a new parlour, but we also needed a new building to house it. I also wanted to milk three times a day and there were staffing issues to consider.

“Our son Ben returned from University a year ago and, although he’s been working on the farm, he’s not yet decided if he wants to make a career out of farming. Robots were the best option to ensure I can keep milking cows”, says Mr Hartley.

He reckons robots are better at milking cows than many people give them credit for. “We’ve got an efficient and consistent system that’s milking cows on demand which has to be better for cows. The teat cups are washed in between each cow; we’ve got individual electronic identification, milk diversion and heat detection.”

Siting of the two robots was an important consideration. An extension to the cubicle house took it closer to the back door of the farmhouse. The robots were installed in the new extension which includes a farm office with a large window looking directly onto the cubicles.

“Robots give us flexibility and at least six hours a day that would normally have been devoted to milking cows – but that doesn’t mean we feel detached from our cows just because we aren’t putting them through a parlour twice a day. In fact we’re more in control of individual cow management,” says Mr Hartley. 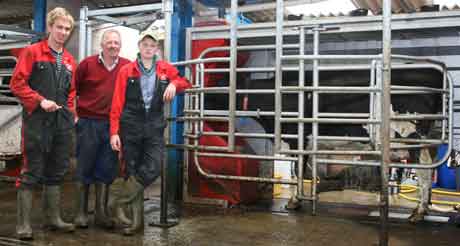 These days his first job in the morning is to sit down in the farm office and check the computer which provides a detailed breakdown of every cow including yield, milk flow, fertility and health status and the number of times milked.

The cows are a lot quieter and more relaxed than they were when we were milking through a parlour. With cows inside all the time it’s easy now to bring a cow to the robot if she’s late being milked, says Ben Hartley.

Because the herd was used to out of parlour feeders it made it easier for them to learn to visit the robots. “Once the robots were installed, but before they were operational, we started to usher cows through them. At first, because they’d just been milked, the robots didn’t detect any milk and the teat cups didn’t attach.

“But as the udders started to fill by afternoon time the robots went into full operation and started to milk the cows. We had a team of men here day and night for two days ushering cows into the robots. After four days about two thirds of the herd was going through voluntarily.

Because cows are now no longer “driven” to a parlour twice a day, the Hartleys say they’ve become quieter. “We don’t have to rely on spotting anything that may need dealing with at milking time. Nothing is rushed any more and, because cows are quieter, it makes moving around in the cubicles an easy way of checking individuals. We see them bulling a lot more easily because their behaviour is more settled.”

The amount of the feed-split is altered according to yield as the lower yielders may not get enough through the robot to entice them in – and it’s the feed that gets them in there in the first place, says Ben Hartley.

In-calf heifers are “trained” to use the robots using a little concentrate, explains John Hartley. “Newly calved heifers are passing through the robots about four times a day and have shown the biggest improvement in yield compared with conventional milking. We’ve produced more milk in May and June this year than we’ve ever done before.”