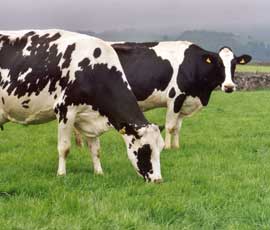 A new strain of superbug MRSA has been found in dairy cows across the England.


Scientists are concerned that cattle farms could be reservoirs for the bug, which can spread to people.

Cases of the MRSA have already been identified people in England and Scotland, as well as further afield in Ireland, Germany and Denmark.

According to a study published in medical journal The Lancet on Friday (3 June), the new strain of the superbug was discovered in 2007 during an investigation into the spread of mastitis in dairy herds.

Following tests on a bulk milk sample from south west England, the scientists found a type of the bug which went undetected using traditional testing methods.

Further tests on herds discovered 15 cases of the disease in milk from dairy farms around the country.

Scientists said the new strain of MRSA, which is genetically very different from other strain of the bug, has been identified in people across Europe.

The strain accounts for between 0.2% and 1% of all MRSA in UK and Denmark, but as detection had been difficult many cases could have gone unrecorded, they said.

Evidence collected by researchers suggested the bacterium could be exchanged between cattle and humans, though it had not yet been proven.

While that was most likely to occur through direct contact, it could also be passed to humans through spreading manure.

But the scientists behind the research said people could not be infected from drinking milk as pasteurisation would kill MRSA.

Laura Garcia-Alvarez, one of the authors of the report, said discovery of the new strain in both humans and cows was worrying.

“However, pasteurisation of milk will prevent any risk of infection via the food chain,” she added.

“Workers on dairy farmers may be at risk of carrying MRSA, but we do not yet know if this translated into a higher risk of infection as many individuals carry MRSA, typically in their noses, without becoming ill.”

Mark Holmes, who led the University of Cambridge research, said scientists would now investigate circumstantial evidence which suggested cows were providing a reservoir of infection.

“Although our research suggests that the new MRSA accounts for a small proportion of MRSA – probably less than 100 cases per year in the UK – it does appear that the numbers are rising,” he said.

“The next step will be to explore how prevalent the new strain actually is and to track where it is coming from.”

Dr Holmes said scientists would carry out investigations on farms to identify any factors which might cause infection and any potential risks to farm workers.

• Despite the findings, consumers have been assured milk is still safe to drink. Click here to find out more.

• Find out the answers to some common questions about MRSA here