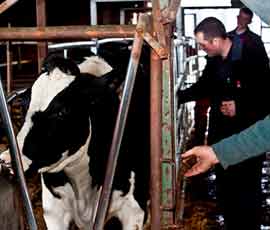 A new independent advisory group that will recommend a future delivery model for veterinary surveillance in England and Wales has been set up.

The group which was set up by the Animal Health and Veterinary Laboratories Agency includes representatives from government, the veterinary profession, livestock farmers and private laboratories.

AHVLA is seeking to identify ways to undertake vet surveillance more effectively and at an affordable cost.

The new model will aim to address capacity imbalances in the current service where provision sometimes outstrips demand.

The group are also expected to recommend how surveillance can become stronger and more cost-effective.

Surveillance has historically been based on investigation of disease incidences with an emphasis on post mortem examinations. But following an internal AHVLA report, areas were identified where surveillance could be achieved at a lower cost.

Commenting on the group, Carl Padgett, president of the British Veterinary Association said: “Veterinary surveillance is an essential component in our animal health, public health, food security and international trade work and we welcome the establishment of the group.

“The emergence of Schmallenberg virus in northern Europe demonstrates the value and ongoing need for a robust surveillance system to work nationally and internationally,” he added.

“But while we understand that AHVLA and DEFRA must ensure value for money from the surveillance network, any future model must be shaped by good surveillance strategies, not the need to cut costs,” Mr Padgett urged.

Later this month the AHVLA will be asking individual vets and livestock keepers to complete an online survey about surveillance in England and Wales.