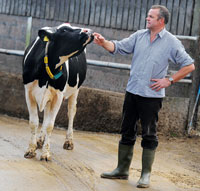 One of the farmers behind plans to build a 3770-cow ‘super dairy’ in Nocton in Lincolnshire has hit out at criticism over the way the project has been handled.

In a letter to Farmers Weekly, Devon farmer and Nocton director Peter Willes admitted mistakes had been made, but insisted the plans were a good idea for the future of the industry and for securing the country’s food supplies.

“Over the past 12 months, we’ve battled on with our plan to create a large dairy farm in the east of England because we still believe it’s a great idea, even if we’ve made mistakes in how we’ve approached it,” he said.

“Fifty per cent of dairy farmers have given up in the past 10 years and we’re just trying something a bit different.”

Criticising those who had condemned the proposals without reading the planning application, Mr Willes said running an efficient farm that used fewer resources and generated less waste met government targets to produce more while impacting less.

“We are all facing reduced subsidies and rising costs,” he added.

“Climate change could mean extreme weather and more disease. And now we are being called on to increase productivity with fewer inputs – and do it sustainably.

“Solutions might include GM, badger culling or new ways of managing livestock, such as those proposed at Nocton. All are, in their own way, novel, contentious and risk bringing activists and the consumers they influence crashing down on us.”

Mr Willes said farmers needed to decide whether to take tough decisions themselves or devolve responsibility to avoid criticism and hope that “someone, somewhere will compensate us for our losses”.

He said dairy farmers needed to be more supportive of each other if the industry was going to take control and shape its own future.

“Knocking one production system in favour of another is a short-term tactic and ends up harming us all,” he added. “We should promote the positives.”

Mr Willes said the industry should also be more truthful with the public and not perpetuate the myth that all dairy farms “run around in fields”.

“[That’s] fine for farms that do it, but let’s be proud of all our production systems and be honest about the challenges we face.”

Celebrating the diversity of British agricultural production would allow farmers to differentiate their products and create consumer choice, he added.

“It should also help us come up with a wide range of creative solutions to address the challenges ahead.”

• Read the full letter and have your say in the FWi forums.