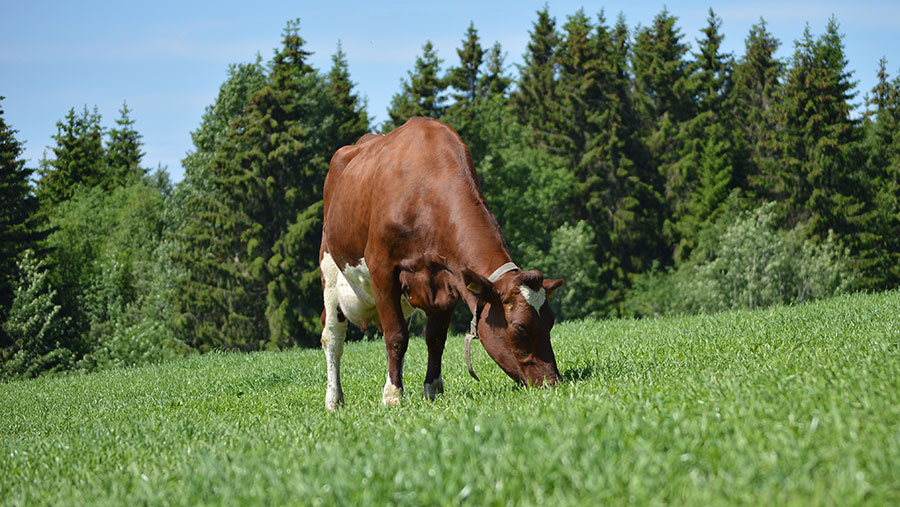 How the trait has been developed

Geno uses the Norwegian national cattle database, which holds current records on 93% of its cows, to track the weights of 1.2 million cows. These weights are then used to estimate dry matter intakes required for bodyweight maintenance.

This information has been used to develop a breeding value for body weight and for FeedSaved for Norwegian Red sires.

See also: How a dairy cut costs and methane and lifted feed efficiency

Geno’s chief technology and innovation officer, Håvard Tajet, said: “The large numbers of records available and the high heritability of body weight, at 0.47, mean  both breeding values are highly accurate.

“The genetics linked to lower feed intakes where body weight and milk yield are maintained have been identified and the information has been used in developing the FeedSaved trait,” added Dr Tajet.

The average predicted transmitting ability (PTA) for the new FeedSaved trait is 0.65kg, which indicates that the average Norwegian Red sire, when crossed with a 700kg cow – which is the base weight used in this trait – will produce daughters that will eat 0.65kg less dry matter/day due to her lower body weight.

However, the top Norwegian Red sires for FeedSaved have a PTA of more than 1kg. A cross-bred daughter by one of these sires, and out of an average Holstein dam, is estimated to eat 1kg or less/day than a purebred Holstein.

“Improving feed efficiency will reduce the cost of overall production and increase profit, while at the same time contributing to a sustainable global dairy production,” said Dr. Tajet.

The FeedSaved trait is part of Geno’s feed efficiency breeding project, which is researching the influence of genetics on sustainable and profitable milk production. It is also measuring and monitoring methane emissions from Norwegian Red cows and on young bulls.