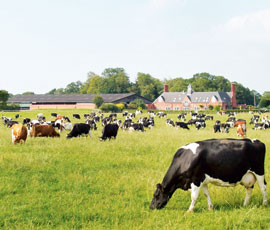 Out-wintering yearling heifers can free-up cubicle space and make more effective use of grassland, according to farmer Philip Feeney.

For Mr Feeney, out-wintering yearlings on poorer performing pastures earmarked for a spring re-seed, frees up 120 cubicles for in-calf heifers and dry cows, while their muck gives a useful boost to soil fertility on an organic farm.

“Rather than re-seeding poorer swards in the autumn and out-wintering on better paddocks, tying it together makes better use of the land and means we can carry over grass on good paddocks for the milkers in spring,” says Mr Feeney, a finalist in the 2010 BGS National Grassland Management Competition.

He farms in partnership with Robert Bostock on 295ha (728 acres) at Old Hall Farm, Malpas, where the herd averages 6000 litres a cow a year – some 75% of this from grazed grass and silage.

As cow numbers have grown to 400 plus followers, the lack of housing has driven the need to out-winter. However, being organic, brassica forage crops are ruled out – a grass-based diet is also preferable to buying in organic forage.

Starting from a low base, Mr Feeney is currently re-seeding 5-10% of grassland a year, prioritising paddocks that will generate the quickest response.

In a rotational grazing system, it’s easy to spot paddocks that are not performing. “We use a plate meter and keep records – low yielding pasture is very obvious – the difference between the top and bottom performing fields is 50%.”

Fields that are too wet for out-wintering are given an autumn re-seed. Otherwise, paddocks are selected on a combination of output, observation and historic performance. Paddocks are shut up from 1 September and grass cover measurements at the start of winter show these poorer pastures usually contain 3000kg/ha DM.

Yearling heifers are picked for out-wintering because they are lighter and cause minimal damage. Mr Feeney says they tread down a maximum 5-7.5cm in wet weather and, as they move on, the grass greens up behind them. However, they must weigh 200kg by late October to meet growth targets during a winter on grazed grass and big bale silage.

Silage bales are fed in a row, 2-3 a day to appetite. Total cost an animal is 76p/day including labour, fencing, silage and land at £120/acre.

Heifers are removed by mid March, then followed by the plough when ground conditions permit. “We plough and leave it if it’s damp to dry out, then work it down into a seed-bed. We shallow plough to 15-17.8cm so we don’t bury the nutrients. Then we roll with a crumbler and power harrow twice, drilling barley on the second pass, followed by the ring roll. Grass seed is then sown followed by flat rolls to firm the seedbed and seal in moisture.”

Spring barley offers a nurse crop, a bit of bulk and increases the dry matter yield from the paddock via the wholecrop. The re-seed mix contains perennial ryegrass and white clover (at 1-2kg/acre), although being organic restricts the range of possible varieties.

Weed control in the new re-seed hasn’t been an issue and the barley comes up quickly to give a good canopy. This is taken as wholecrop in early August. “A spring re-seed is better for clover establishment as it’s all sitting under the barley ready to grow once the wholecrop comes off.”

The re-seed is then grazed (by cows or youngstock) at the end of September, and left until spring. Clover isn’t established well enough to supply the nitrogen for a faster re-growth. There is more, however, in the second year.

The ultimate aim is to re-seed 5% of swards a year. Given time and the correct management, Mr Feeney hopes to increase sward longevity through avoiding poaching, maintaining fertility and not over-grazing. “We expect at least 15 years from those we are re-seeding now,” he adds.